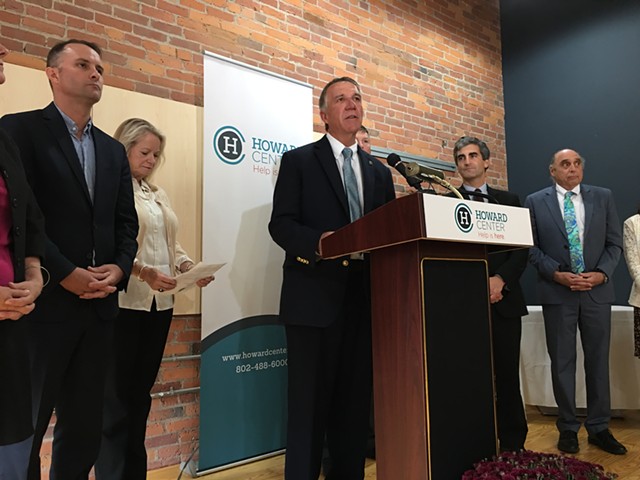 In a bipartisan lovefest with the occasional cautionary sprinkle, Gov. Phil Scott announced Thursday that “Vermont now can quickly meet the demand for [opioid] treatment in all 14 counties.”

Scott appeared with a brace of administration officials, Democratic officeholders and health care providers at Burlington's Howard Center to declare that, in Chittenden County, there is no longer a waiting list for addiction treatment services. Elsewhere in the state, he said, waits had been reduced.

The Republican governor began the press conference with a shoutout to his predecessor, Democrat Peter Shumlin, for prioritizing the opioid crisis, and made it clear that his own team had continued “the strong work of the previous administration in this area.”

He went on to credit Burlington’s Democratic mayor, Miro Weinberger, Democratic Attorney General T.J. Donovan and the predominantly Democratic state legislature. And while plenty of Dem officeholders were on hand, Scott was the only Republican elected official in the room.

Donovan credited Scott, his staff and Secretary of Human Services Al Gobeille, whom he called “a guy who gets things done.” Weinberger was happy to shine the spotlight back on Scott. “I was concerned when we were in January, a new administration in place, I didn’t know how long it would take a new group to come in to do the work that needed to be done,” the mayor said. He credited Scott and Gobeille for hastening the day when the state could eliminate waiting lists for opioid treatment.

“So many of the other strategies that we are pursuing rely, fundamentally, on treatment without delay for their success,” Weinberger continued. “The fact that this milestone has been reached opens so many new possibilities.”

Burlington Police Chief Brandon del Pozo echoed the theme. “I’ve had parents who say to me, ‘Can I chain my child to the bed in our basement until a spot opens up in a treatment facility?’” he recalled. “The way forward is when a person is ready, get them to treatment without delay.”

Scott injected a cautionary note. “This is not a ‘spike the football in the end zone’ type of moment,” he said. “We all realize we have so much more work to do.”

When asked if the elimination of the waiting list was sustainable — if the state can keep pace with the demand for treatment — Howard Center CEO Bob Bick said, “We’d like to think so … [but] we are in uncharted territory here with this particular epidemic.” He noted that the opioid crisis is “far and away different than anything we had experienced in the state of Vermont.”

Every time Gobeille stepped to the microphone, he referred to “2-1-1,” the state’s telephone database of available services for all kinds of needs, including addiction treatment. If the news of no waiting list prompts a rush of inquiries, he said, “That’d be great! 2-1-1.”

More words of warning came from Commissioner of Health Mark Levine. “Keep in mind, this is a chronic condition, like diabetes or heart disease,” he said. “Many individuals go through treatment several times. To expect that we will suddenly see a major change in the curve isn’t realistic at this point in time.”

Opioid abuse, Levine said, “is afflicting an entire generation.” He emphasized the need for drug education to keep the next generation from succumbing to addiction.

And if that wasn’t enough bad news, he threw some cold water on the elimination of the waiting list.

“Approximately eight out of 10 individuals who suffer from opioid use disorder are not actively seeking treatment,” Levine noted. “So even with wait lists gone for everyone currently in our system, we are not actually accommodating the needs of the majority of those with the disorder.”

In short, the good guys have just made a first down — but the goal line is still way, way off in the distance.