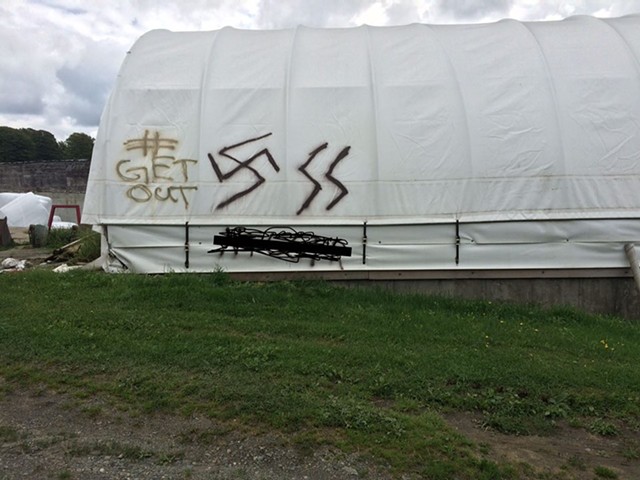 The owners of Jasper Hill Farm in Greensboro are offering a $1,000 reward for information leading to the arrest of the person who tagged one of their supplier's barns with racist and anti-Semitic graffiti.

An Andersonville Farm employee on Friday morning found a swastika, the Nazi "SS" symbol, a racial slur and the words "#get out" spray painted on a hoop barn at the West Glover dairy, which produces milk for Jasper Hill's famed Bayley Hazen Blue cheese.

Mateo Kehler, head cheesemaker and cofounder of the award-winning Jasper Hill Farm, posted a photo of the vandalism Monday on the cheese company's Facebook page, announcing the reward and deploring the incident.

"We're hoping that this will spark dialogue, a much broader community dialogue and response, and that we can either change some minds, and if not, push that bigotry and that ignorance and that hate back down into the sewers, really," Kehler told Seven Days in an interview.

The word "nigger" was also scrawled on the hoop barn, which is used to store hay, Kehler said. He censored the word before posting the photo online.

At least three other places in the area — with no connection to Jasper Hill — were also tagged with similar slurs around the same time, likely late Thursday or early Friday, according to Kehler. A mailbox was tagged, as was the pavement on Shadow Lake Road, he said.

Kehler reported the graffiti to Vermont State Police, who he said are investigating.

"I don’t think it was necessarily directed at us, but it affected us," Kehler said. "We're a team of 78 and on that team, there's everyone, every kind of person."

Kehler posted the information about the reward around 4 p.m. Monday, and by 7:20 p.m., some 1,000 people had shared it with their Facebook friends. The post also garnered more than 160 comments, including some offering to increase the reward and many expressing disgust with the vandalism.

"We took it really seriously and didn’t feel like, given what's happening on the national stage, in a post-Charlottesville world, that we could just let it slide," Kehler said.