When Vermont Republicans gather to rally their troops and raise money for the 2018 election, you might wonder: How do they address the elephant in Washington who threatens to make this a dismal campaign cycle for them?

The answer: They don't.

Gov. Phil Scott, former governor Jim Douglas and New Hampshire Gov. Chris Sununu addressed a crowd of about 150 at a Republican Party fundraiser Thursday evening at the ECHO Leahy Center for Lake Champlain. They kept their politics as local as they could.

Jokes about New Hampshire vs. Vermont were big: Why is Vermont's maple syrup sweeter? You have more tree-huggers, Sununu quipped.

Sununu, the most loquacious speaker of the three, is the only one who mentioned the T-word: President Donald Trump. And that came during a half-hearted attempt at a joke about the three governors meeting in the basement of Trump Tower.

"I don't know where that joke would go," he safely declared. 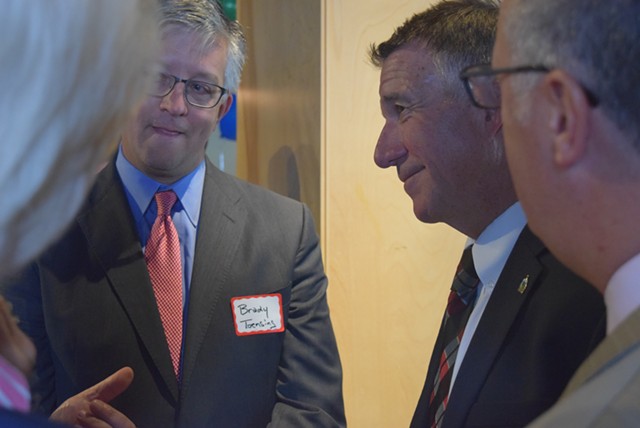 Otherwise, the three speakers emphasized the importance of supporting local Republican candidates. They talked up a new party-building campaign called Unity 76, through which the GOP aims to claim a majority in the 150-member Vermont House.

There are 53 Republicans in the House today — more than at the end of Douglas' term, the former governor said, and enough to deny Democrats a veto-proof majority.  "But 53 isn't a huge margin," he said. "That's what Unity 76 is about."

When Scott took the mic, he continued the pitch. "We need a few more people," he told the audience, which included Republican mainstays and a handful of lobbyists currying their favor.

Sununu contributed some pep talk. "You're not blue," he said of Vermont's political leanings. "You're as purple as they come." 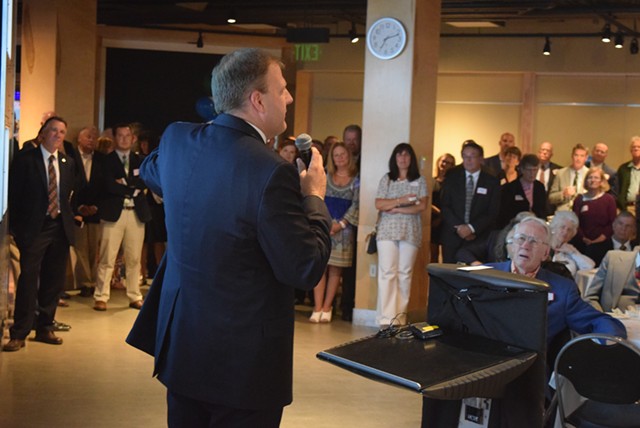 Sununu was the one speaker to talk about out-of-state GOP politicians.

"Who doesn't love Paul LePage?" Sununu said of Maine's Republican governor, who's known for outlandish comments.  Sununu referred to him as a "great governor."

Sununu also invoked the names of Republican governors Greg Abbott of Texas, Scott Walker of Wisconsin and Chris Christie of New Jersey. All of them might win cheers from the Vermont Republican audience but would likely draw groans from the independent and Democratic voters whose support Scott needs if he is to win reelection in 2018.

Clean-water advocate James Ehlers has announced plans to seek the Democratic nomination to challenge Scott. Other Democratic challengers are expected. Typically, a first-term governor such as Scott can expect a smooth reelection, but Vermont voters' discontent with Trump could become a factor.

Afterward, Scott acknowledged to Seven Days that the direction of the national Republican Party, and particularly the president's lack of popularity, will dog him as he runs for a second term.

"Every day is a challenge because I have to to respond, not defend, but respond to whatever the president says," Scott said. "During this next campaign, I'm sure that will become very much a topic of conversation."