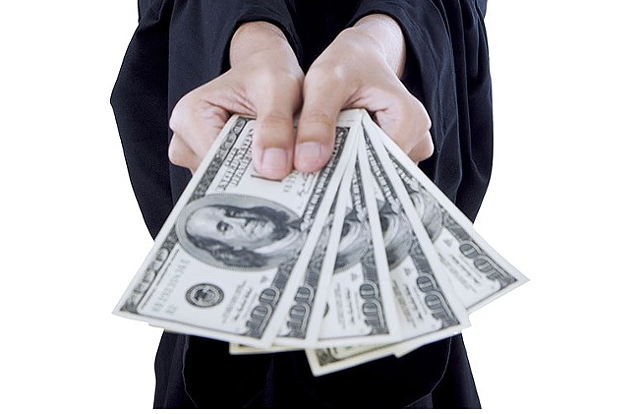 The state tax department is sending nearly 20,000 letters to Vermonters informing them that they may owe sales tax for online purchases. If so, they’ve got two months to pay up without interest or penalty.

The “Dear Taxpayer” letter reads, “Most Vermonters owe use tax, however many don’t fully understand what use tax is or how much they owe.”

Use tax is what Vermonters pay in lieu of a sales tax collected at the time of purchase — usually when buying something online, over the phone, in a state such as New Hampshire that doesn’t charge a sales tax, or by mail. The letter is meant to inform Vermonters that they are responsible for paying that use tax when filing their annual income tax form.

The Department of Taxes is attempting this year to collect more unpaid sales tax, according to commissioner Kaj Samsom. In setting the 2018 state budget, Vermont lawmakers counted on an increased sales tax haul of $3.175 million.

Amazon this year began charging sales tax on purchases made by Vermonters, but many other online retailers do not. Vermont legislators have long grappled with the issue because they have authority only over sellers with a physical presence in the state, giving online retailers a tax advantage.

Lawmakers may have finally come up with a solution. Online retailers who do at least $100,000 in sales in the state and don’t collect tax will be required to report Vermont purchases to the Tax Department in January.

The letter to taxpayers warns of the changes and notes that the reports include “buyer information which will be used in compliance efforts.”

Samsom declined to say how taxpayers were selected to receive the letters.

“Not all Vermonters are getting this letter,” he said.

One taxpayer, who spoke on condition of anonymity because he feared being targeted by the state, shared with Seven Days the letter he received. The tax department noted that he reported $0 in use tax on his income tax form for three years in a row.

The letter, dated August 18, informed him that he could retroactively pay sales tax by October 31 without penalty. The letter offers information on what purchases qualify for use tax, a list available as well on the Tax Department’s website.

The website also provides a chart that estimates sales tax owed based on adjusted gross income. The taxpayer plans to pay that estimated amount, but said he was taken aback by the letter. “My take on it is it’s a bad way to solve a problem,” he told Seven Days.

Samsom said the department has gotten a variety of reactions from letter recipients. Some have paid sales tax they owed, some wanted more information about what items qualify and others complained about it.

Samsom declined to say whether those who receive the letter would be targeted for an audit if they don’t pay sales tax retroactively. Anyone who receives the letter and is confident they owe no sales tax should ignore it, he said.

Samsom said about 20,000 of the letters are being sent out at an estimated cost of $1 a letter. He said he expects the mailings will bring in more revenue than they cost to produce. 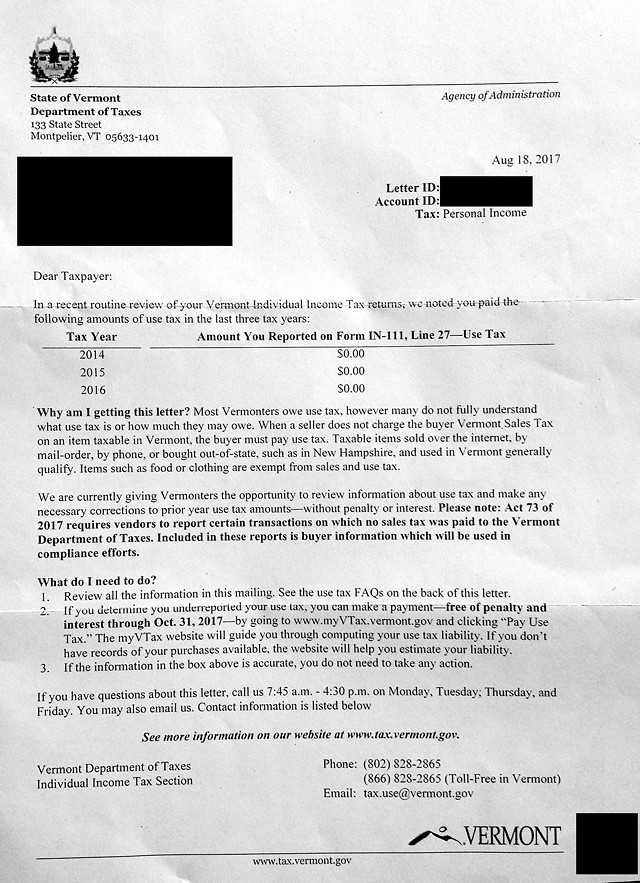