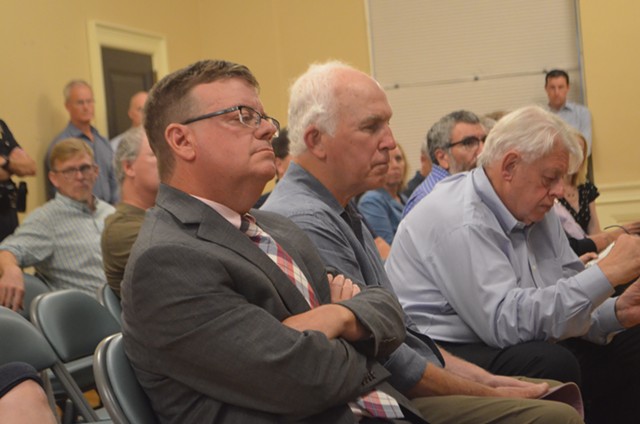 The Keep BT Local cooperative is facing an uphill battle in its bid to buy Burlington Telecom.

David Provost, the Burlington Telecom Advisory Board chair, offered strong signals Monday during a public update on the sale that the co-op may not make it to the final round of the selection process.

"BTAB unanimously expressed serious concerns about the sustainability of KBTL’s financing plan and lack of operating experience," Provost told the audience at a Burlington City Council meeting in Contois Auditorium, after the council spent more than an hour discussing the deal in executive session.

There are three finalists that have viable bids, according to Provost.

Two bids from "well-capitalized, established businesses" are cash offers within "a few million dollars of each other." In both cases, the two bidders have no financing contingencies and would not take on long-term debt.

"An investor with local connections" is the third bidder, Provost said. That offer has "a lower valuation, and includes other benefits for the community and local tech economy."

There were originally eight proposals submitted for consideration by BTAB. Neither the names of the finalists nor their bids have been disclosed by the city.

Alan Matson, the Keep BT Local board chair, defended the viability of the co-op's bid. "From what I heard, I feel like an underdog," he said during public comment at Monday's meeting.

He pointed to the ownership model and the co-op's board as strengths, and touted its commitment to transparency. Keep BT Local is the only bidder to publicly announce its intentions.

"I think that that is just another point where the framing could use a bit of changing," he said. "We look forward to working with the community to help them understand what our offer provides."

Matson also criticized the city's opaque process. "One of the concerns we have is that we just don’t really know what other offers are provided to the city right now. That’s something that as both citizens, and as applicants in this process, would be good for us to know," he said.

Supporters of the co-op echoed Matson's concerns with the selection process. "Secrecy sucks," quipped Burlington resident Alex Chaffee. Others asked for increased citizen input. "I feel it’s somewhat disrespectful to me and all the citizens of Burlington to not be able to do some research about these companies," said Solveig Overby, who said she's a co-op member.

The city has fallen behind the schedule it marked out earlier this year. In the initial timeline presented by the BTAB, the finalists would present to the city council in July, with a final decision made by July 31. Burlington officials must finalize the sale by the end of the year to maximize the city’s share of the profits.

Provost also noted that there will be some mandates for the buyer, including "a restriction on resale, representations limiting customer price increases to content costs, requirements to maintain BT’s commitment to net neutrality, and an enduring ability for Burlington to use the fiber to support smart city initiatives."