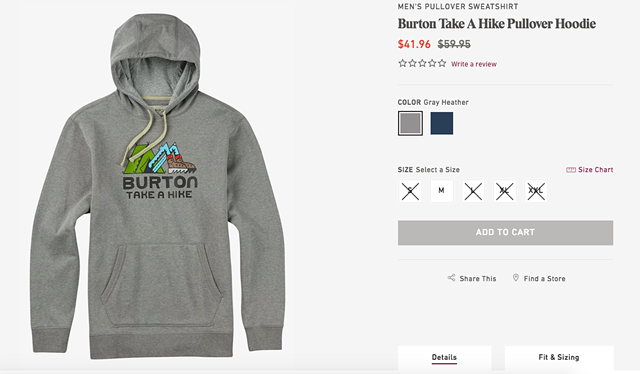 “Long Trail is engaged in a variety of socially and environmentally conscious efforts in the Vermont community and has used its trademark ‘Take a Hike’ in support of those efforts,” the company writes in its suit, filed by Kevin Henry of Primmer Piper Eggleston & Cramer PC. “As a result, the trademark has achieved a high degree of recognition among consumers, especially in Vermont.”

Founded in 1989 and located in Bridgewater Corners, Vt., Long Trail first filed for a “Take a Hike” trademark in 1995, according to a listing on the U.S. Patent and Trademark Office website. The company has since “continuously used the trademark ‘Take a Hike’ in connection with its apparel, beer and other products,” the eight-page suit reads.

Burlington-based Burton, meanwhile, has begun using the phrase on its own brand of apparel, according to the suit. The snowboard company’s website seems to back that claim. Burton sells at least two items, a pullover hoodie and a T-shirt, that have “Take a Hike” emblazoned across the bottom. The phrase is accompanied by an illustration of a tent with a person’s legs sticking out.

Such use “was done in disregard of Long Trail’s valid and incontestable trademark rights,” the suit reads.

“Burton has infringed Long Trail’s trademark ‘Take a Hike,’ engaged in unfair and deceptive practices, and traded on Long Trail’s goodwill and reputation, to the irreparable injury and damage of Long Trail,” the brewing company claims.

The lawsuit asks that Burton cease using the phrase, that the company account for profits off any apparel that featured the phrase, and that a jury award Long Trail damages and attorney fees associated with the civil action.

Burton did not immediately respond to a request for comment.