A new state panel has just three months to come up with three recommendations for how Vermont can respond to climate change.

“There’s a lot of work to do,” Peter Walke, deputy secretary of the Agency of Natural Resources, told the 21-member Vermont Climate Action Commission at its inaugural meeting Tuesday. “By December, we’re voting on three recommendations.”

The work is imperative and the timeline is tight, Walke's cochair told the group. After making its initial recommendations, the group needs to come up with a long-term plan by next July.

“I think we’re at a transformative moment in history,” said Paul Costello, executive director of the Vermont Rural Development Council. “Solving climate change is the most fundamental challenge of our time.”

Walke had selected Annette Smith of Danby, a controversial opponent of large renewable energy projects, to cochair a technical working group. That prompted at least three prospective members to decline to serve.

At Tuesday’s meeting, Brian Shupe, executive director of the Vermont Natural Resources Council, told Walke that he had gotten ahead of the commission’s work by making the advisory group appointments in advance.

Walke said he had heard the criticisms but would stand by the appointment. “We’re not going to stifle,” he said, of the points of view the panel would consider. “We will discuss everything.”

Smith sat in the audience at Tuesday’s meeting. As the room filled up, she quipped, “People came to see me get yelled at.” But there was no yelling Tuesday, just introductions and laying the groundwork for future meetings. 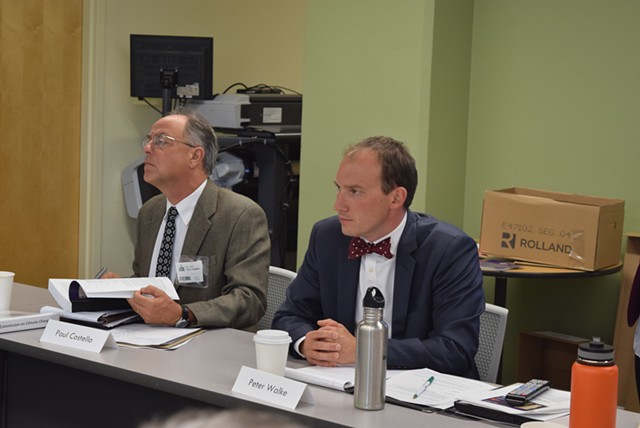 The commission includes a farmer, a forester, a trash-hauling executive and a high school student, as well as a host of representatives of the energy sector.

Marie Audet, of Blue Spruce Farm in Bridport, said she wanted to serve on the commission because climate change is affecting her industry. She noted a recent report that said that 50,000 cows in Montana have no grass to eat as a result.

Peter Bourne, of Bourne’s Energy in Montpelier, said his industry is in flux, too. “I don’t know what our whole world is going to look like in 10 years,” he said.

“Somebody is going to solve this problem,” said Joe Fusco of Casella Waste Systems in Rutland. “I think it should be solved in Vermont.”

The commission started its work by breaking into four groups that each made note of what techniques are working to combat climate change and what opportunities still remain. All four identified the state’s Efficiency Vermont program as one that works. It provides incentives for residential and business energy-efficiency work and is funded through a fee on Vermonters’ electric bills.

Commissioner Linda McGinnis said her group recommended that its budget be increased. Left unsaid was the fact that the governor this year unsuccessfully proposed reducing its budget.

High on the list of opportunities from all four groups were transportation-related changes, including encouraging the use of electric cars and expanding public transit. Transportation accounts for 42 percent of Vermont’s greenhouse gas emissions, Jeff Merrell of the state Department of Environmental Conservation told the commission. Nationally, transportation makes up just 27 percent of emissions, he said.

The public will get a chance to offer ideas at four public hearings around the state in the next month. The panel tentatively set hearings for the evenings of September 14 in St. Johnsbury, September 21 in Manchester, September 28 in St. Albans and October 5 in Brattleboro. Online submissions will also be sought, Walke said.

The commission’s meetings and other information will be posted on its website.