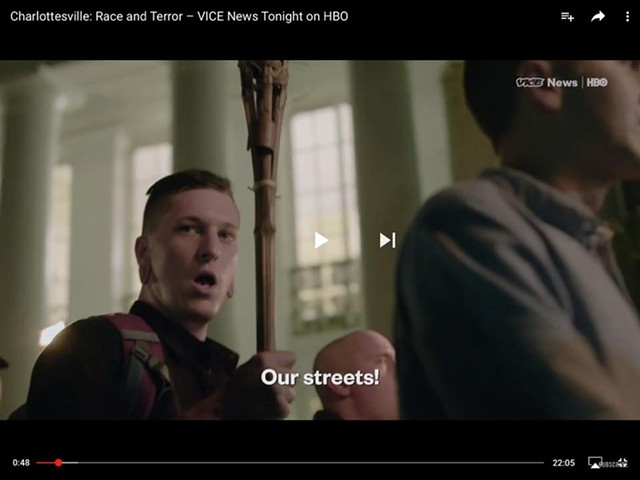 A Vermonter was among the neo-Nazis and other “Unite the Right” types who shook up Charlottesville, Va., in a march-turned-mêlée last weekend. Today’s white supremacists don’t wear hoods, apparently, so as soon as the tiki-torch-wielding images went viral, internet vigilantes around the country started naming and shaming them.

On Tuesday Seven Days tracked down Burlington resident Roy, who said the rally “showed that we’re a legitimate movement, that this is a movement of people. It’s not like a fringe thing.”

In a 25-minute interview, Roy admitted to attending the weekend’s events and spoke unabashedly about his “white identitarian” views.

“I feel like white people are discriminated against in this country,” Roy said. “You see a lot of stuff in the media and in popular culture portrayed by the left in this country that is, frankly, anti-white. But that’s not white supremacy. We just want to stand up for our own culture and heritage.”

He continued: “If you look up the definitions of ‘black pride’ or ‘Puerto Rican pride’ or ‘Asian pride,’ those will be considered pride in whatever race that is. But if you look up ‘white pride’ online, it’s white supremacy. It has negative connotations.”

Roy, who grew up in Essex, said his views evolved over time. He used to be a “leftist” before he realized “it didn’t make sense, it was bullshit” and adopted more “libertarian-type views.”

Those who knew him as a teenager said he was “angry,” but far from a full-throated white nationalist.

“Back then he was just a goth-punk kid, and it never would have occurred to me — it seemed counterintuitive to the crowd we ran with, and especially our close friends,” said Kae Burdo.

“We forget that Vermont isn’t immune from this, I think. It’s a moment of the bubble bursting for a lot of folk,” she said.

“Are you aware that you employed an actual nazi?” one person wrote on the company’s Facebook page.

Roy originally was suspended, according to Skip Weldon, Uno’s chief marketing officer. He said the company learned on Tuesday morning that Roy had participated in the Charlottesville rally. The company later announced it had fired Roy.

Roy declined to comment on his employment situation. He did tell Seven Days he sings in a band called “Hate Speech,” which he described as a “power electronics against Communism” group.

“He came out and said things like it is,” Roy said. “He addressed the main issue in this country, which I think is immigration. And that we need to do something about illegal immigration, and frankly, legal immigration.”

Roy said attending the rally “reinforced the feeling” that the white nationalist movement is legitimate and he defended his decision to exercise his First Amendment rights. Are there more rallies in his future? “Probably,” he said.

“It’s a very nice city, and there’s not a lot of crime because it’s a very white city,” Roy said. “And because Vermont is a very white state, you don’t have all these problems you have in other parts of the country.”

What Roy doesn’t like, he told Seven Days, are the refugees in the area.

“They take jobs, they are given resources from our tax dollars,” he said. "You hear about how there’s a housing shortage in Chittenden County, but they’re putting up these people who aren’t from this country. They bring them over and they don’t even speak our language.”

Roy said he’d heard from some friends that he’d been outed. He was concerned because “radical leftists” posted threats against him and his family online.

“I didn’t do anything wrong, I didn’t participate in any violence,” he said. “Just exercising my First Amendment rights.”

“You are Jewish, right? Are you ethnically Jewish?” he asked.

I asked him how that was relevant to our interaction.

“It just means that I’m concerned that you’re going to lie about me,” Roy said.

“Why would you say I would lie about you?” I asked him.

“Because,” he replied, “that tends to be what your ethnic group does.”