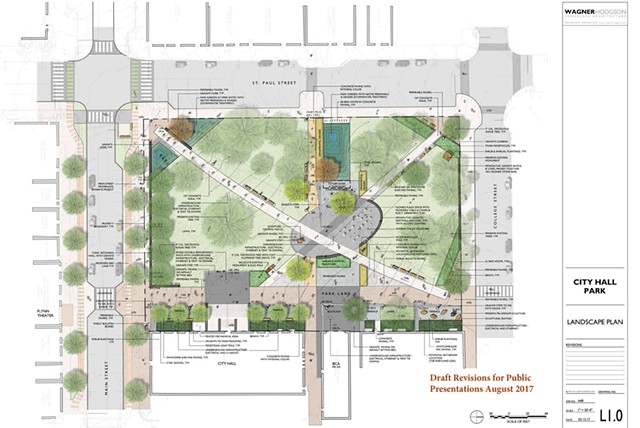 The newest version of the Burlington City Hall Park redesign drew a host of critiques and questions on Monday night.

About 50 people turned out to Burlington City Hall Auditorium to hear about the latest iteration of a years-long process to renovate the downtown green space.

The new plan, including tweaks to a version presented late last year, has one less diagonal pathway, additional seating and bike parking, as well as more bulletin boards, explained Meagan Tuttle, a planner with the city's Planning and Zoning Department. The current design includes space for a stand-alone public restroom and a spray fountain that could double as a light display.

The latest changes reflected public input and feedback from historic preservationists, said Tuttle. The park, with its current soil compaction and erosion, "is being loved to death," said David White, the department's director.

The planning process for City Hall Park began in 2011. The renovations are expected to cost about $3 million, about a third of which will be funded by private donors; taxpayers will pay the remaining portion. The Development Review Board will evaluate the latest version this fall.

Construction is expected to begin in the spring of 2019, a year later than originally planned because of a renovation to St. Paul Street scheduled for next year.

Monday's meeting at times turned contentious. Some in the crowd shouted over public commenters. Many of those present were associated with "Keep City Hall Park Historic," a group that had previously circulated their own plans for the park.

"It feels a little strange making comments when we're told that the comments don't mean anything," said Genese Grill, who spoke against the city's plan.* "There are thousands and thousands of residents who have no idea that the common green space is being renovated."

Shannon Reilly,* owner of Magnolia Bistro, complained about the farmers market's impact on downtown businesses. The market is held in the park each Saturday during the warmer weather.

Others quibbled about the design of the fountain and the impact of a proposed coffee kiosk.

Some speakers accused the city of "social cleansing" by ridding downtown of poor and homeless people. Several others, meanwhile, voiced concerns about safety. "We need a policeman in the park to make people feel safe," said Charlie Messing, a Burlington resident who spoke out against the design. A fight in the park last Tuesday ended with a stabbing.

"I've been harassed at the park more times than I care to mention," said Kelly Devine, executive director of the Burlington Business Association. Nevertheless, she added, "I think this design has a lot to offer Burlington."
Find the latest plans for Burlington's City Hall Park on the Great Streets BTV website.