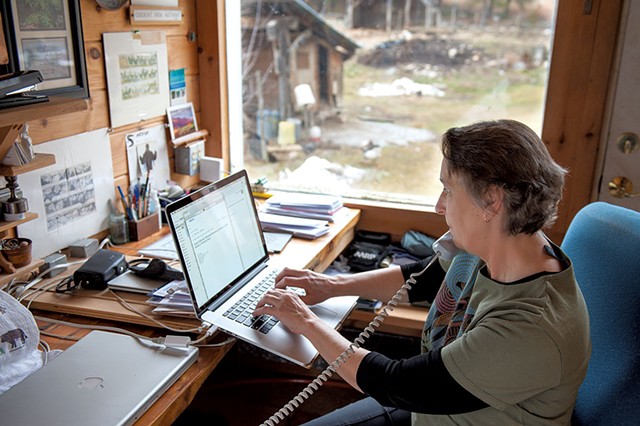 Gov. Phil Scott's Climate Action Commission hasn't even held its first meeting, but it's already taken a step that may alienate a broad swath of Vermont's environmental community

The commission's cochair, Agency of Natural Resources Deputy Secretary Peter Walke, sent an email Wednesday seeking members for the commission's Technical Advisory Group. He wrote that two people would serve as the group's cochairs: Kevin Jones, professor at Vermont Law School, and Annette Smith, founder of Vermonters for a Clean Environment and a vociferous critic of large-scale wind turbines.

While Jones' appointment has drawn little controversy, Smith's has caused at least three prospective TAG members to decline to serve — and prompted a statement of concern from the commission's sole representative of the environmental community.

Vermont Natural Resources Council energy and climate program director Johanna Miller, a member of the commission, said that naming the two as cochairs "calls into question the independence, transparency and, ultimately, the integrity of the commission." She called the move "disappointing and disturbing" and called on the administration to revisit "this preemptive decision at the first commission meeting."

That meeting is scheduled for Tuesday, August 15.

Ben Edgerly Walsh, climate and energy program director for the Vermont Public Interest Research Group, said he rejected an invitation to join TAG because of Smith's leading role. Walsh's colleague, VPIRG Energy Independent Vermont campaign director Tom Hughes, also declined. So did Jon Erickson, a University of Vermont professor of ecological economics and, it should be noted, the David Blittersdorf Professor of Sustainability Science & Policy. (Blittersdorf is a prominent developer of renewable energy, including large-scale wind.)

"I don't think Annette Smith as cochair would be evenhanded given her public record," Erickson said. "Her advocacy has been against renewable energy."

Erickson served on a technical advisory committee to a state commission on Lake Champlain, and he noted that such a group should consist of experts, not advocates. "[Smith] is antithetical to what a technical advisory group should be. 'Technical' implies objectivity. I'd feel the same way if they appointed Paul Burns," Erickson said, referring to the VPIRG executive director, who is an advocate for large-scale wind.

Miller and Erickson appear to make valid points. The governor's executive order creating the CAC charges it with naming "a Technical Advisory Group to provide additional expertise and analysis of technical issues that may be required to fulfill the Commission Charge."

Smith and Jones were chosen by Walke himself.

When asked why he picked Smith despite her notoriety in pro-renewable circles, he repeatedly ducked the question.

Why Smith? "The goal is to bring everybody to the table," Walke replied.

Why Smith? "It's important to know that all voices are being heard. We could have picked anyone."

But you didn't. Why Smith? "I would not have agreed to chair this for the governor if I thought we were not going to get to tangible results. The governor gave me the commission to lead, and all decisions were mine. I asked Annette and Kevin to be cochairs."

Gee, I thought Walke was cochair of the broader commission, along with Paul Costello, executive director of the Vermont Council on Rural Development.

"I'm not really privy to it," said Costello of the Smith appointment. "As cochair, I've talked to the chair about membership, but I haven't had input into the nominations."

Look out! Hot potato coming through!

Smith rejects the idea that she's not an expert. "My areas of expertise are vast," she said.

Perhaps because of the blowback, Walke is trying to minimize TAG's importance.

"The goal of the TAG is to be accessible to the commission," he said. "The only role of the cochairs is to seek out experts when the commission cannot. It's informal by nature."

That isn't what the executive order said, nor is it in line with Erickson's experience of a technical advisory group as consisting of technical advisors. Or Smith's expectations, for that matter.

"It's an extremely limited role," she said. "I had a thought, based on the executive order, that the group would have some responsibilities. But Kevin and I were told that we're invited to [commission] meetings and that's about all."

At this point, Walke is anxious to put this unfortunate prologue behind him. "We need to get through the first meeting. We need to refocus," he said.

Part of that refocusing will be earning the trust of environmental advocates, including the one who's serving on the commission itself.