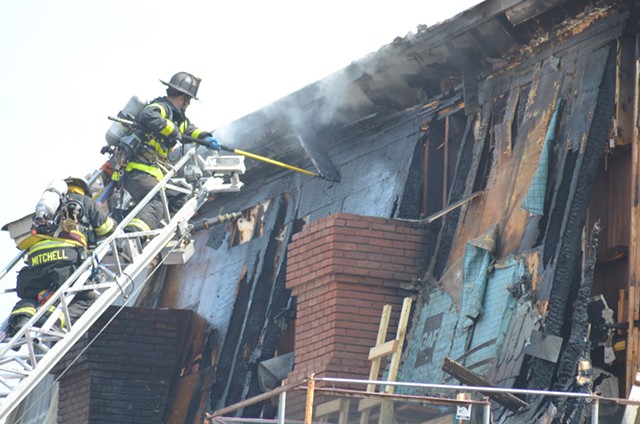 Animal and plant collections housed in a historic University of Vermont building survived “largely intact” after a fire broke out Thursday morning, the university said.

Construction workers soldering copper material on the roof of Torrey Hall sparked the blaze around 8:10 a.m., UVM said in a statement. By 10 a.m., the fire had been nearly extinguished, though hot spots flared up as firefighters from the Burlington and Malletts Bay departments tore out charred boards.

No injuries were reported, UVM said. The building will remain under “fire watch” for 24 hours.

Torrey Hall was built in 1863 and is listed on the National Register of Historic Places, according to the university. The third floor currently houses the Pringle Herbarium. Scaffolding was visible around the building's top floor, signs of a renovation project underway there this summer.

The Pringle Herbarium is a "collection of dried plants" with "300,000 sheets of mounted and accessioned plants; it is the third largest herbarium in New England" and “the largest Vermont flora collection in the world,” according to UVM.

The existing collection made it through the fire “largely intact,” the herbarium’s director, David Barrington, determined, though “there is some damage to materials that had not yet been processed.”

The Zadock Thompson Natural History Collection, housed on the building’s second floor, appeared to have escaped unscathed, the university said.

“Plans are being prepared for relocating the collections, and to begin the building restoration process,” the university said in an evening statement about the fire.

Torrey Hall also contains two classrooms and offices for UVM’s Biology and Plant Biology departments. No classes were being held in the building this summer, the university said.

“As a precaution, the university is beginning to work with academic deans and [the] university’s Campus Planning Department to find alternative space for the building’s occupants,” the statement said.