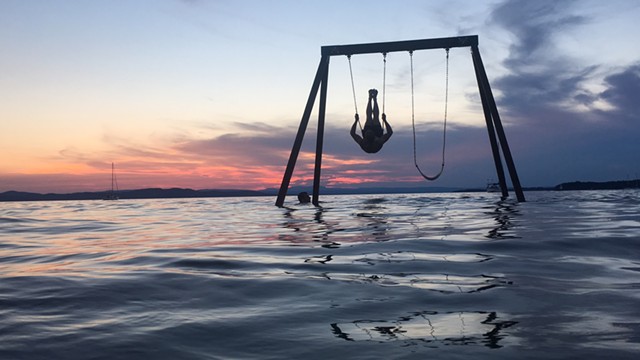 It appeared suddenly and mysteriously Sunday night: a swing set in about three feet of water in Lake Champlain off the shore of Burlington, north of the Blodgett Oven property.

Right away, people started wading in to try the pop-up playground. They were all smiles and squeals of delight.

Rosanne Whitney of Brewster, N.Y., was one of those to venture out Monday. She spotted the swing while passing by on the city’s bike trail.

“We thought it was something unique and fun,” Whitney said. “It’s just something so different. Once you’re out there, it’s pretty fun to use.”

But just as quickly as the playground appeared, it was gone. Around 11 a.m. Tuesday, workers with the Burlington Parks, Recreation & Waterfront Department disassembled the set.

Christian Wurzburger was there when it was taken down. Kids from the windsurfing camp he was running for WND&WVS were playing on the set when the parks department crew floated up on what Wurzburger described as a “salvage barge” with a crane attached. “They asked if it was ours and I said, no, I had no idea whose it was,” Wurzburger said. They told him they were taking it out because it was a navigational hazard.

Before it disappeared, the spontaneous swing set delighted and mystified beachgoers who wondered: Who put it there?

“I’d say four drunk guys in the middle of the night,” guessed Dennis Randolph, who was enjoying a sunny Monday at the beach with his two dogs, George and Ksusha. “Who else is gonna do that?”

Randolph got one thing right: It took four people to get it out there. Seven Days tracked down the ringleader, a 31-year-old Queen City resident who fancies himself Burlington’s Banksy. He asked that we not reveal his identity, saying he viewed the project’s mysterious origin as part of its appeal. He produced photos of it being built.

The artiste told Seven Days he and some friends brought the materials to the beach around 7 p.m. Sunday. Plenty of people watched, but no one said a thing.
“I think it’s like when the large-breasted woman walks down the beach without a top on, you know?” the creator quipped.

Once the crew assembled the swing set, they hauled it 150 yards off the beach, where the water is a few feet deep.

“There’s kind of a sweet spot where it wouldn’t be too deep if some kids decided to go out there and it would also be deep enough to cushion anyone who did jump off,” said the man. “We tried to build it really well,” he added.

Seven Days tested out the swing set Monday evening, and found that it was quite sturdy. While it was hard to get into the swings, it was in good working order. It was made of lumber, and the creator said he used welded metal joints made by a playground company to connect the pieces.

He put bases under the posts so they wouldn’t sink into the sand and become lopsided. All told, he said, he spent about $400 on supplies.

He wrote “FREE” across the top bar “because I wanted people to know that anyone could use it, not like it’s an exclusive thing.” He chose the spot because it’s not reachable by car and because the beach, along the city’s bike path and colloquially called Bum Beach, is known as a place where “anything goes,” he said. He said his gang created it as a fun, interactive and artistic endeavor, so he was “bummed” to hear the city took the set down.

“I just think that Burlington has an opportunity to kind of cultivate paradise,” he said. “And having a few installations that are free access to the public, I think, is kind of a nice thing as opposed to, you have to have money to live here or to experience the fulfilling thrills that we have to offer.”

All day Monday, swimmers waded out to take their turns. By sunset, as two people got in a few more swings, the builder paddled out in a canoe and installed two support beams. He also added a sign warning boaters not to anchor by it.

The builder, for his part, said he wanted to erect it without all of the “red tape.”
“This is probably not the kind of thing the city would allow — no matter what — in my opinion, so it’s the kind of thing that did have to go under the radar,” he said.

How right he was. The structure stood for less than 48 hours.

Nathan Whitney, 17, who swung on it Monday with his family, said the city should embrace the set by expanding it with more playground pieces like monkey bars and turning it into a tourist attraction.

Randolph, who’s known around town as the Crystal Guy because he hands out pieces of quartz, said, “It’s one of the funnier pranks I’ve ever seen.”

“That’s why people are drawn to it,” he said as he watched people play on the set Monday from the beach. “It’s a swing set out in the middle of the lake — it’s funny!” 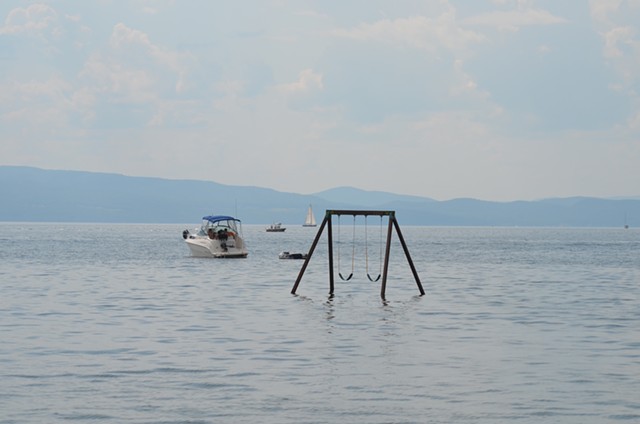