Champlain College Will Use UVM Frat House as a Dorm 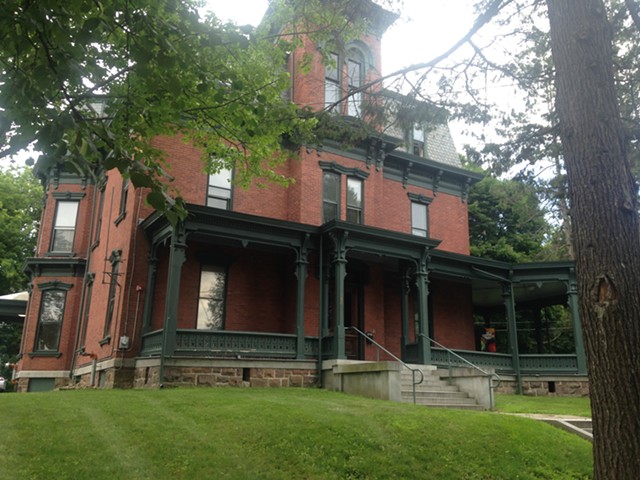 Champlain College is leasing the Phi Gamma Delta fraternity house and will move 29 students into the Burlington mansion in late August.

The University of Vermont slapped the frat, commonly known as Fiji, with a four-year suspension in March for alcohol and hazing violations.

The sanctions required that the chapter, at the corner of Main and South Willard streets, cease all activities for the duration of the suspension, thereby opening up a housing opportunity for Champlain.

The new beds mean the college can bring  some students back to the heart of its Hill Section campus. These students were being housed several miles away at Bayberry Commons Apartments because there was no available dorm space, according to college spokesman Stephen Mease.

Champlain is in the process of repairing and renovating the building at 158 South Willard — required after what Mease described as "aggressive living" by its previous occupants. The house will be ready for students and a full-time, live-in staff person on August 25.

The 13-bedroom mansion dates to 1877 and was built in the Second French Empire style, with marble fireplaces, 14-foot ceilings and ornate woodwork. Civil War General William Wells — who survived Gettysburg without a mark but later endured saber thrusts and shrapnel wounds in battle — originally owned the home.

Fiji acquired the house in 1972 and put its own touches on the property, including a Ping-Pong table and a bar on the main floor.

Champlain's lease is for one year, with an option for four more years, Mease said. He would not comment on whether the college wants to eventually buy the building, saying that decision is "to be determined." The lease means more students will have the convenience of living near the heart of campus. Champlain will also save money on a shuttle service it provided to and from Bayberry Commons on Grove Street, Mease added.

Both UVM and Champlain College have purchased idle sorority and fraternity buildings in Burlington's Hill Section in the past.

The Burlington Development Review Board voted 7-0 on June 14 to approve a change of use from fraternity to dormitory.

It's unclear if that will be the building's permanent use. In a May 1 letter to the DRB as the application was pending, Champlain College associate vice president of campus planning John Caulo said that a five-year lease is anticipated, after which Phi Gamma Delta plans to apply to revert the use back to fraternity.