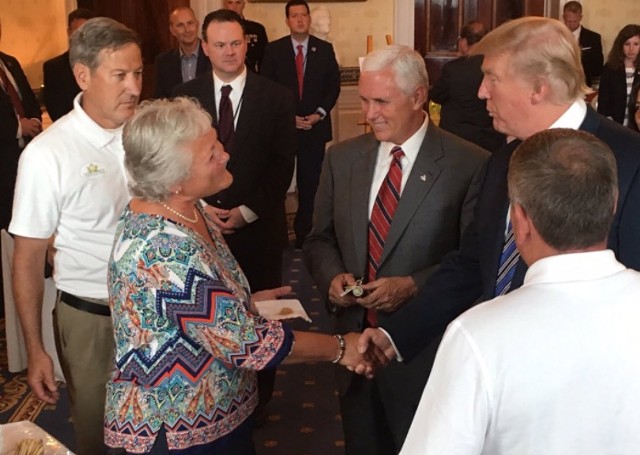 Mark and Marianne Dubie were on vacation in Arizona when the invitation came last Wednesday to display their Dubie Family Maple products at a 50-state Made in America showcase at the White House.

Despite logistical challenges, the husband-and-wife team accepted the invite and scurried off to Staples in Phoenix to create poster boards championing Vermont’s sweet stuff.

They were met Monday in Washington, D.C., by Dubie’s brother, Brian, who flew in with two suitcases carrying 70 pounds of maple syrup and maple candies.

Later in the day, the three Dubies welcomed President Donald Trump, Vice President Mike Pence and several hundred other visitors to their exhibit in the White House Blue Room.

“It was really cool,” Mark told Seven Days after leaving the White House. “The president spent five minutes with us.”

Trump told the crowd in a speech afterward, according to comments provided by the White House, “My administration is removing the burdens and regulations on your companies so that you can compete, thrive and grow.”

The brothers Dubie, who live next door to each other in Fairfield, said they didn’t know how they were chosen to represent Vermont. They were told that White House staff googled Vermont maple syrup and found the business that Mark and Marianne co-own.

Brian said there was no indication that his political background — the Republican served as Vermont’s lieutenant governor from 2003 to 2011 and as the party’s 2010 candidate for governor — was a factor.

But the Trump administration did manage to land Vermont exhibitors disinclined to give the controversial president a hard time. That’s no small feat in a state that overwhelmingly voted for Democratic rival Hillary Clinton, has hosted numerous protests of Trump’s presidency and sends Sen. Bernie Sanders (I-Vt.) to Washington.

Brian carefully answered a reporter’s questions about his support for Trump. He praised the president’s focus on the economy and trade, and said he was honored to represent the family business. Otherwise, Brian quipped, “I’m just the guy who carries the syrup.”

Mark was less guarded in his support for the commander-in-chief. “He’s very popular with me,” he said. “I think he’s making great changes.”

Mark is hoping, for example, that Trump will make it easier for Vermont maple syrup producers to sell their product in Canada. “If some tax changes could level the playing field, it would give Vermont sugarers the opportunity to go north,” he said.

But he said he would have jumped at the chance to represent Vermont at the White House when Democrat Barack Obama was president, too. “He’s our president and the presidency is bigger than one man,” Mark Dubie said. “A lot of America needs to think that.”

Mark Dubie said he invited Trump to the Green Mountain State — and the president didn’t decline the offer.