In a Surprising Turn, McAllister Takes the Witness Stand | Off Message

In a Surprising Turn, McAllister Takes the Witness Stand

by Mark Davis and Molly Walsh 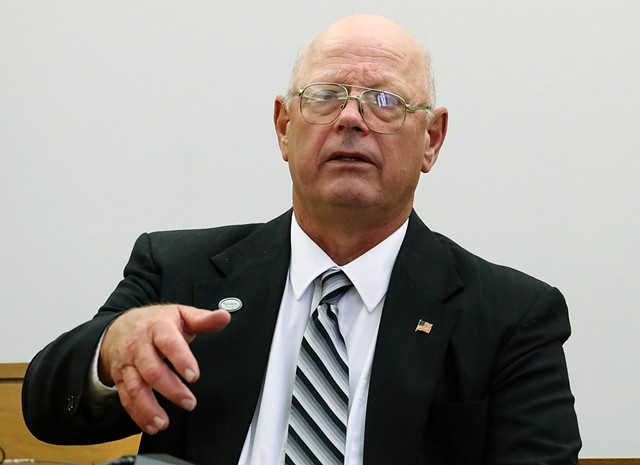 Former state senator Norm McAllister took the witness stand in his own defense on Friday morning and said the woman who has accused him of sexual assault cajoled him into a months-long consensual relationship.

He was the final witness, and faced tough questions during cross-examination. Jurors began deliberating the case around 5:30 p.m.

McAllister forcefully denied ever coercing or assaulting the alleged victim during testimony in Franklin Superior Court. He claimed that she initiated a sexual relationship in January 2014, several months after she had come to live and work at his farm.

At the time, McAllister said, he was grieving the loss of his wife, who died of cancer in September 2013, only two months after she was diagnosed. Meanwhile, the victim had lost her children to the Department for Children and Families, and took the job in hopes of getting them back.

In January 2014, they were sitting on a couch together in his Highgate home and she came on to him, McAllister said, under questioning from his attorney, Bob Katims.

He continued, "One thing led to another. She said, 'I think I can make you feel better.' She said, 'I'm awful lonely too. I don't have my children. I just went through Christmas without my children. I'm separated from my husband. I understand what you're going through.' She started to unzip my pants and started things with me."

"I guess we had an understanding that, I don't think it was love," he said. "It was just two needy people."

During cross-examination, Deputy State's Attorney John Lavoie went on the attack, challenging McAllister's interpretation of a taped telephone call between him and the alleged victim. Vermont State Police set up and monitored the call.

"English is your first language right?" asked Lavoie sarcastically. "You don't have any problem with English?"

The prosecutor asked McAllister why, during the taped conversation, he did not protest when the victim said that McAllister had inserted his fist into her vagina despite her crying in pain and saying no.

Lavoie went into graphic detail. At one point, several women on the jury grimaced as Lavoie asked McAllister to hold up his hand.

"If you shoved that up someone's vagina it would hurt. Right?" the prosecutor asked.

"That's what I would assume," McAllister answered.

McAllister is charged with felony sexual assault and two misdemeanor charges of prohibited acts in what prosecutors allege was a sex-for-rent scheme that included instances of forced sex.

McAllister testified that he ended their relationship in 2014 after a parole officer visited his house and told McAllister that a man who had been visiting the alleged victim was her abusive ex-husband, who had been ordered to stay away from her.

The alleged victim had lied to McAllister about the man's identity, McAllister said.

"I said, 'I think we're done. I don't want to do this,'" McAllister testified.

During graphic testimony, he said that he needed Viagra to have sex, forcing him to schedule encounters with the woman in advance.

Katims finished his examination of McAllister by playing the recording of the phone call, which the jury has heard three times.

The phone call marked the first time the woman claimed that some of their encounters were not consensual, McAllister said.

"Up until this phone call, had she ever expressed these things? 'I was in pain. I was crying. I told you to stop.'" Katims asked McAllister. "This is the first you're hearing any of that?"

McAllister's decision to take the stand surprised observers and people familiar with the case. There were audible gasps in the gallery when Katims called McAllister as a witness, and more observers began filing into the courtroom as word of the development spread.

In January, the case appeared finished when McAllister agreed to plead no contest to reduced charges that carried a maximum seven-year sentence.

But McAllister backed out of the plea deal, claiming his attorneys had pressured him into it, and hired a new lawyer, Katims.

The first McAllister trial, based on sexual assault claims from another alleged victim, ended in June 2016 after that woman admitted she lied under oath during the trial. Prosecutors hastily dropped the charges.

McAllister, who was arrested outside the Statehouse in 2015, ran for reelection while the case was pending, but lost in the Republican primary last August.

Before the case went to jurors Friday evening, the lawyers gave their closing arguments.

McAllister "got her to be his personal prostitute," Lavoie said. "In exchange for sex with [her], she got a place to live rent-free the whole time she was there," Lavoie told the jury.

He also said there was clear evidence that McAllister was guilty of the sexual assault charge against the woman.

"Consent is an affirmative act that you express by your words or by your actions. If you are crying or you are crying out in pain, that is not conferring consent," Lavoie said, referring to the victim's statements during the taped conversation with McAllister.

Katims told the jury the tape was the result of coaching by the police and did not prove McAllister's guilt. The victim is a chronic liar who trumped up the sexual assault charge to hide from her husband that she was in a consensual sexual relationship with McAllister, Katims said. The victim "is a woman who knows how to play the system. She knows how to lie, to cheat, to get the results that she wants," Katims said.