Boy Found Dead After Falling Into Winooski River | Off Message 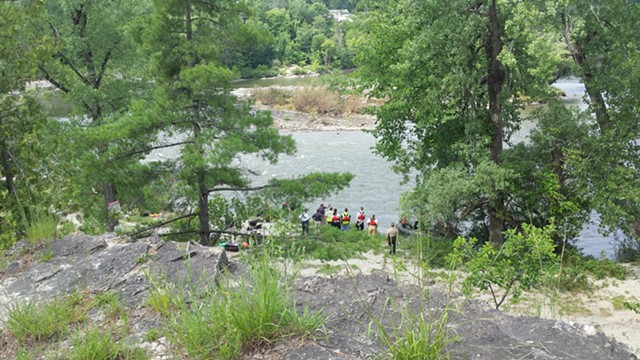 Authorities on Wednesday afternoon recovered the body of an 11-year-old boy who slipped and fell into the Winooski River on Tuesday evening.

Ali Muhina had been playing on the riverbank with friends when he slipped and fell into the water, friends and relatives told Seven Days. The other boys ran home to get help after they were unable to pull their friend back to safety. Witnesses on the other side of the river, just below the hydroelectric dam, called police.

Colchester Technical Rescue, the Winooski Fire Department and the Winooski Police Department started searching for the boy around 7 p.m. and ended for the night about three hours later. "It got too dangerous for the rescue team to recover anybody in the dark," said Winooski police chief Rick Hebert.

"Once you go into body recovery mode, which we were last night, the last thing you want to do is to lose a responder who's trying to recover a body," said Hebert. "It's unfortunate, but we have to think about the divers' and rescue teams' lives as well."

The Vermont State Police, which has a team of divers, joined the effort on Wednesday morning.

When asked why state police waited to join the operation until Wednesday morning, Hebert explained, "When we were initially responding, all the children had run for help. We hadn't confirmed there was actually anybody in the water. So we felt that Colchester Technical Rescue was enough for the immediate until we were able to put it together."

"By the time we did, it was dark and we were done for the night," he continued.

The recovery team used sonar to scan for indications of body mass in the water. Police also brought one of the boys who was playing with Ali at the riverbank to the scene to help describe more exactly where the child had fallen into the water. With the help of an interpreter, the recovery team was able to piece together a timeline of events.

According to Vermont State Police Lt. Garry Scott, it was important to know when Ali's companions last saw him with his head above the water. Scott said that Ali was still struggling in the water when his friends ran home to get help. Based on that information, the recovery team determined that Ali was likely to have been carried further downstream.

Searchers worked throughout the day. Winooski police announced that Ali's body had been found shortly before 5 p.m.

Ali's father, Salimu Muhina, cut a forlorn figure as he sat among relatives and friends who had come to watch the recovery effort earlier in the day. The Somali family arrived in Vermont last summer. They spent more than a decade in the Kakuma refugee camp in Kenya, where Ali was born. He's the second oldest of six children.

Ali's death is the second water tragedy in the area in as many days. On Monday, 17-year-old Christian Kibabu drowned while swimming in Lake Champlain off Oakledge Park in Burlington.