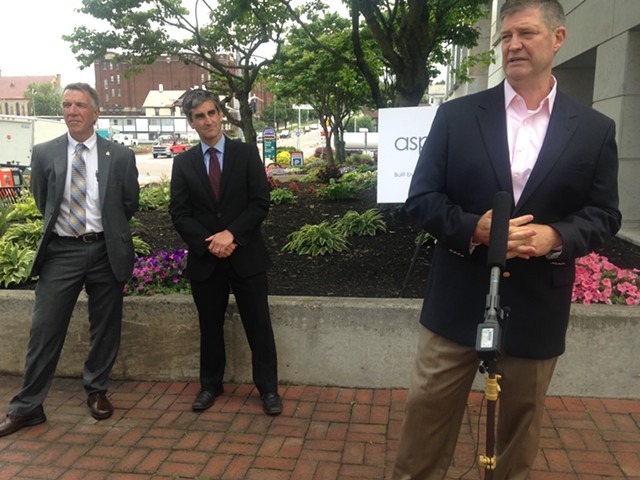 The local drug-screening company that was targeted in the state's largest-ever Medicaid fraud case last year has a new name — Aspenti Health.

The new owners of the former Burlington Labs announced the rebranding at a press conference Monday outside company headquarters on Main Street in Burlington.

Gov. Phil Scott and Mayor Miro Weinberger were on hand to offer their support, saying the reorganized company plays a vital role in opioid addiction treatment.

The Aspen symbolizes clarity of purpose and the "ti" in the new name is a reference to harmony and the seventh note on the musical scale, said Chris Powell, CEO of the reconstituted company.

Over the past year the company has "focused on building business integrity, increasing our financial wherewithal and compliance programs [and] driving efficiencies in our lab, so that the patients and the community has results that they can count on," said Powell.

The renaming appears to be a deliberate bid to move away from the company's rocky past as Burlington Labs. The homegrown company offers drug testing for private employers. It screens the urine of people in opioid treatment programs to show that they are taking anti-addiction meds such as Suboxone and not mixing them with street drugs. The company was known for rapid growth and impressive philanthropy until its legal and financial troubles hit last year.

Company founders Michael and Jodie Casarico and other principals agreed last October to pay the Vermont Medicaid program $6.75 million in a settlement brokered by the Vermont Attorney General's Office.

The seven-year repayment plan covers fines as well as roughly $5 million for improperly billed charges. The deal paved the way for a group of local investors headed by former IDX Systems executive James Crook of Shelburne to acquire the company. That deal closed in January.

The Casaricos have no stake and no role in Aspenti, Powell said at the press conference.

Aspenti has about 140 employees, including 90 at 199 Main Street in the Courthouse Plaza office building in Burlington.

The company will move its lab facility from Courthouse Plaza to a new location in South Burlington but will retain other employees in Burlington for at least a year if not longer, Powell said.

Burlington's mayor praised the new owners for navigating a tricky health regulatory system to get relicensed, and for keeping jobs in Burlington. Both the mayor and the governor portrayed the company as a partner in the battle against heroin and prescription drug addition.

A baby is born to an opioid-addicted mother in Vermont every day, said Scott, as he reiterated his "six-three-one" talking point about the Vermont workforce, school enrollment decline and opioid addiction.

The numbers keep him up at night, said Scott, adding that it will take "all of us coming together" to solve the opioid problem.

Weinberger said opioid addiction is the largest public health crisis of our lifetime, adding that "overdose deaths are still rising like a rocket ship without an end in sight."

Powell said Aspenti will look at ways to share drug-testing data with partners, to identify trends and solutions.