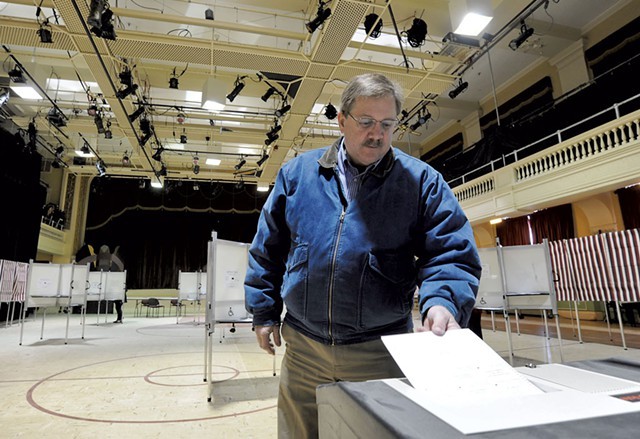 Last week, the commission sent letters to all 50 states requesting reams of voter data, including names, birth dates, addresses, partial Social Security numbers, party affiliation, military service status and criminal records. Condos responded on Friday, saying he would only turn over the limited information he is required to disclose upon request.

And then his inbox filled to overflowing.

"We received a lot of emails," said Deputy Secretary of State Chris Winters. "The vast majority were saying, 'Don't comply at all.' Many said, 'Thank you, you're doing the right thing.' A few said we should provide all the requested data, along with some impolite comments."

There were enough messages that misconstrued Condos' position that he decided to clarify.

"I want to make one thing perfectly clear: Vermont will NOT be complying with the Commission's request for Vermont voters' private and sensitive information," Condos said Monday in a written statement. "Protecting the privacy and security of Vermont voters' most sensitive information is something I take very seriously, and I will not compromise the privacy of Vermont citizens to support the Trump Administration's witch hunt for widespread voter fraud, which has been disproven many times over by non-partisan experts."

Condos' team also made an unsettling discovery over the weekend.

"The Commission's email address for submission of voter data is unsecured," Condos wrote. "For [commission co-chairs] Kris Kobach and Vice President Pence to think that having sensitive voter data sent in this manner is acceptable is baffling."

Kobach is the Kansas secretary of state. Many states, including his own, have refused to comply, in part or as a whole, with the commission's request.

Condos believes he has a legal duty to turn over public information — but he is still exploring his options. The commission set a deadline of July 14 for its request. At the very least, Condos will wait until then to make a decision.

"We're having conversations with the [Vermont] attorney general's office and the governor's chief counsel," Winters explained.

In his statement, Condos blasted the Trump commission.

"The President has used social media to ask what states have to hide about voter fraud, revealing the true purpose of this commission: to rationalize the President's unsubstantiated claims that three to five million people voted illegally in the last election," Condos wrote. "At best this Commission is a waste of taxpayer money, and at worst its true purpose is to champion the President's false and baseless claims of voter fraud to aggressively pursue a campaign of voter suppression and intimidation."

He closed by again promising "to explore all options available to avoid assisting this sham Commission.”

Coincidentally, the National Association of Secretaries of State is holding its annual conference this weekend in Indianapolis. It seems certain there will be some lively discussions about the Trump commission's investigation.