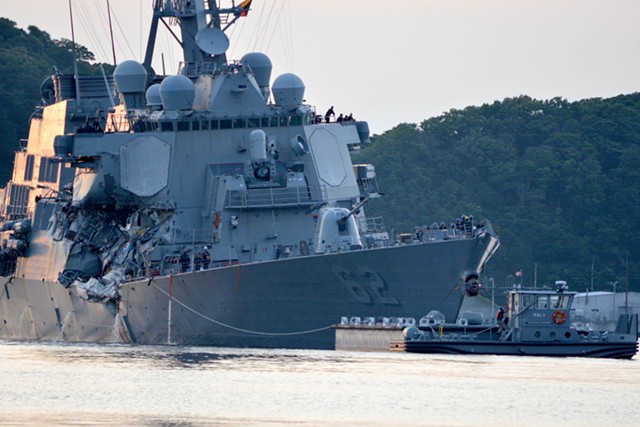 From 6,500 miles away, Betty Ann Fitzgerald has closely watched the news out of Japan, where the USS Fitzgerald was involved in a fatal crash at sea.

The 74-year-old Montpelier woman is closely connected to the Arleigh Burke-class destroyer. She’s the ship’s “sponsor” — the person chosen by the secretary of the Navy to help christen and launch the vessel. And it bears the name of her late husband, Lt. William “Bill” Fitzgerald, who was killed on August 7, 1967, while defending his compound near Co Luy, Vietnam.

The military posthumously awarded the Vermont native the Navy Cross — the branch’s highest honor. He was 29.

The collision over the weekend, again a world away, “just brings it back to day one,” Betty Ann told Seven Days on Monday.

She remembers the events of 50 years ago vividly. The couple married in 1964, three years before Bill deployed for Vietnam. They had three children; the youngest, Neil, was born while his father was at war. When Bill learned of his birth, he immediately wrote his wife and jokingly asked her whether his newborn son “was holding the football the right way.” 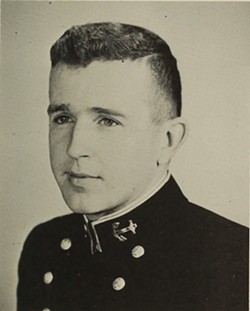 Betty Ann still lives in Montpelier, in the house she bought after Bill’s death and where she raised their children. Over the years, organizations have honored her husband. There’s now a Fitzgerald Hall at the U.S. Naval War College in Newport, R.I. And the local Disabled American Veterans group named their chapter after the Vietnam War hero, Betty Ann said.

In the early 1990s, the Navy wrote Betty Ann to tell her a ship was to be named in her husband’s honor. Betty Ann broke a ceremonial bottle of champagne on the ship’s bow during its 1994 launch in Bath, Maine. The following year, at the Fitzgerald’s commissioning in Newport, R.I., she ordered the sailors to “Man our ship and bring her to life!” — the traditional command made by a ship’s sponsor at the event. Then-congressman Patrick Kennedy also spoke, a highlight for Betty Ann.

She had a close relationship with the ship’s first captain, Gary Holst, and has kept in touch with captains and crew members over the years; they fondly refer to each other as the “Fitzgerald family.” She’s personally met six of the ship’s 15 captains.

“They’re part of my family now,” she said. “Every Christmas, I mail out 315 to 330 cards — and I sign every one of them — and put them in one box and ship it out. I send a special one to the captains and tell them to pass them out so every guy on the ship gets a Christmas card.” Just last month, the ship’s current captain, Commander Bryce Benson, visited Betty Ann in Montpelier. They’d first met last summer, when Benson was an executive officer aboard the ship. During that visit, he brought his wife and kids. Betty Ann took the family for treats at Morse Farm Maple Sugarworks and then held a potluck at the Elks Lodge with about 50 or 60 of her friends and relatives.

“Every time the captains come, I take them around by the high school in town, and up by Bill’s grave, and where Bill and I got married at St. Augustine Church — just places that we’d been together,” Betty Ann said.

During his recent trip, Benson asked for a more low-key affair. It came just before he took over as the ship’s commander.

“It was just him. We went out to lunch together and just talked and talked,” she said. “It was very nice.”

One of Betty Ann’s children first told her of the crash. A 29,000-ton container ship had smashed into the side of the USS Fitzgerald off the Japanese coast. The collision crushed dozens of sailors’ berths, along with Benson’s stateroom.

Seven sailors were reported missing, while Benson was airlifted to shore for medical treatment. He’s since been released from the hospital, according to the Navy.

Betty Ann heard from Holst on Saturday. He called to fill her in on the crash, giving her details about the area of the ship that had been struck — though he, too, had plenty of questions, Betty Ann said.

Rescuers originally scoured the waters around the ship for the missing sailors before they were found dead in the flooded, crushed sleeping quarters. Betty Ann called the news “devastating.”

“When we’d heard they’d found them, it was a relief — but just think what the parents are going through,” she said. “You just can’t help but feel so sorry for the parents.”

Betty Ann felt a similar anguish when she learned of her husband’s fate nearly 50 years ago. Bill had flown to California for training on New Year’s Day in 1967. Then Betty Ann and her oldest daughter, Penny, went to visit for two weeks. The family went to the San Diego Zoo and Disneyland, then returned to Vermont just before Bill left for Vietnam toward the end of March 1967.

“That was the last time we saw him,” Betty Ann said.