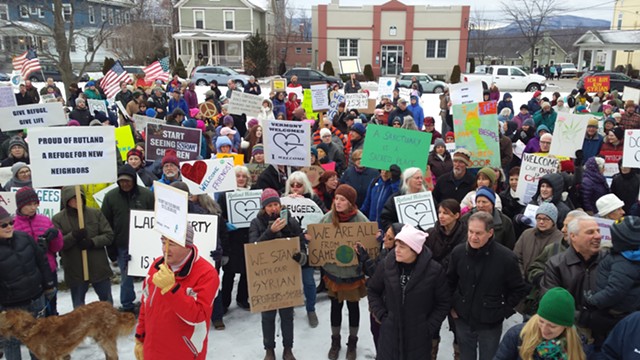 After months of uncertainty and waiting, a third Syrian family arrived in Rutland last Thursday, according to the Vermont Refugee Resettlement Program. The latest arrivals brings the total number of Syrians who've resettled in the city to 14.

"It took a little while, but they're here," said Amila Merdzanovic, director of VRRP. The nonprofit is a field office of the U.S. Committee for Refugees and Immigrants, one of nine agencies nationwide that assist refugees in the resettlement process.

The family of five consists of a husband, wife and their three children, one of whom is old enough to attend school. They arrived from a refugee camp in Jordan and the parents speak "some English," said Merdzanovic. Citing privacy reasons, she declined to disclose additional personal information about the family.

Merdzanovic did, however, share that the Syrian mother had asked her about the location of the nearest mosque. The new arrivals were also eager to find out how they could bring other family members to the U.S. "One of the kids was missing his grandmother," Merdzanovic said.

"I hear this question many times," Merdzanovic continued. "Eight out of ten people, that's the first thing they asked."

There are opportunities for family reunification through different programs, said Merdzanovic. But it generally takes a long time. "We're talking about years — between three to five years, sometimes even longer," she explained.

The newest Syrian family will be kept busy in the coming days and weeks. A VRRP case manager will help them apply for social security cards, register for school and English classes, and set up health assessment appointments. Rutland Welcomes volunteers are prepared to provide the family support, Merdzanovic added.

Meanwhile, the first two Syrian families to arrive in Rutland are doing "really well," said Merdzanovic. "They're working, taking care of themselves ... looking forward to summer."

More Syrian families may be on their way to Rutland. "We have eight cases assured, which is very exciting," said Merdzanovic.

"Assuring a case" means VRRP is prepared to welcome and support a family or an individual. In terms of real numbers, up to 46 more refugees may arrive in Rutland before the end of the fiscal year on September 30.

The resettlement process was thrown into disarray after President Donald Trump signed a travel ban in January prohibiting people from six different countries from entering the U.S. And the U.S. has agreed to admit only 50,000 refugees this fiscal year — down from 110,000.

A federal court has since ruled against the travel ban and resettlement has resumed.

However, as a result of the slowdown in the number of arrivals, Merdzanovic said that VRRP has had to cut two positions at its Colchester office, which currently employs 15 full-time staff members and one part-time staffer. The agency also has one staffer in Rutland, though it's looking to hire additional employees in anticipation of more Syrian arrivals, the director said.