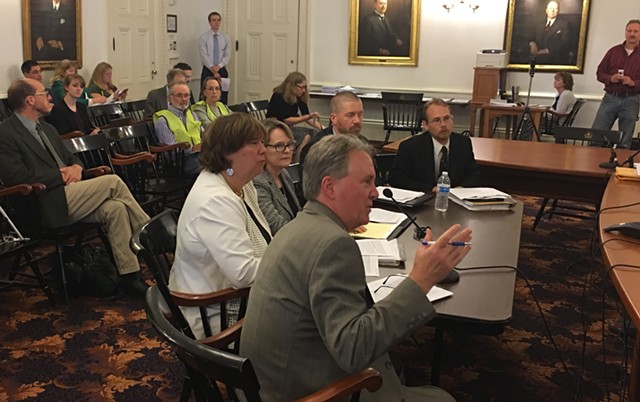 The Legislative Committee on Administrative Rules heard testimony but postponed a vote until its next meeting, on June 22. The panel's chair, Sen. Mark MacDonald (D-Orange), said a crowded agenda and multiple witnesses left no time for full deliberation and a vote.

"In the hour and a a half we had, we tried to do more listening than questioning. Next time we’ll do more questioning," he said after the hearing.

The rules were created by the Vermont Public Service Board. They would impose tougher limits on turbine noise (42 decibels during the day and 39 at night), and create a setback requirement equal to 10 times the height of a turbine. For modern turbines, that would mean nearly a mile of uninhabited land in all directions.

The rules can be approved or rejected by LCAR, but any rejection cannot be on policy grounds alone — it must be based on flaws in the rulemaking process or failure by the PSB to fulfill legislative intent. Board members Margaret Cheney and Sarah Hofmann* defended their work as balancing various interests and meeting the legislature's requirements.

Annette Smith, of Vermonters for a Clean Environment, testified in favor of the rules as being "somewhat more protective" than the present standards, but spent most of her time criticizing the rules as not being strong enough.

One issue that captured LCAR's attention was a provision in the setback rule that allowed a developer to proceed if they convinced all nearby residents to sign on to the project.

"If you have 400 neighbors and only one objects, can the project go forward?" asked Sen. Ginny Lyons (D-Chittenden).

PSB staff attorney John Cotter acknowledged that that would indeed be the case. But, he added, "The rule does provide for waivers, or the developer may be able to reconfigure the project somehow."

Olivia Campbell Andersen of the pro-wind group Renewable Energy Vermont said that the waiver process was too uncertain, and would discourage developers from even considering Vermont.

"A developer would need to spend $750,000 to $2 million to assess the viability of a project" even before seeking waivers, she said. "You’re asking businesses to take a crapshoot as to whether it would be approved."

Members of LCAR were offering few hints on the decision.

MacDonald was allowing himself room to go either way.

"Are these rules being written on noise, or are they being written for people who don’t like wind and find wind invasive, intrusive, ugly or annoying?" he explained. But then he added, "When rules are clear and carry out legislative intent, we must approve them."

His final word: "We haven't got there yet."