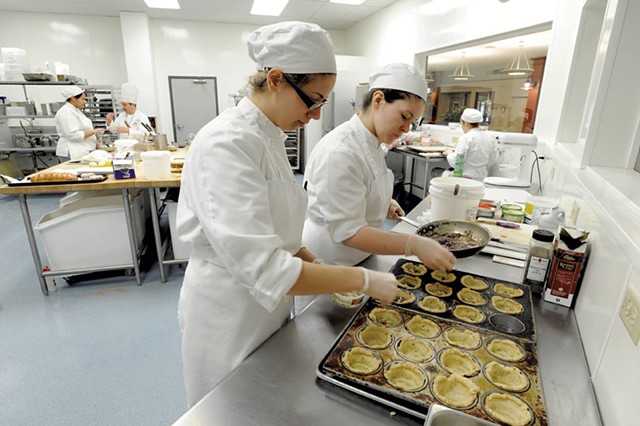 New England Culinary Institute in Montpelier has merged with an art school in suburban Cleveland, confirmed NECI spokesman Philip Stevens. NECI released a statement from its president on Thursday with the announcement.

The merger of NECI with Virginia Marti College of Art and Design in Lakewood, Ohio, went into effect Wednesday, Stevens said. The colleges will continue to offer their own curricula but will pool administrative resources including IT, finance and accounting, he noted.

The schools already share a president, Milan Milasinovic, who took over the leadership of NECI in December. Milasinovic was then the president and owner of the art school in Ohio. He was unavailable for comment Thursday,

The joining of the two colleges "is a synergy of two art schools," Stevens said.
He considers NECI to be an art school because it offers degrees in "culinary arts and baking of pastry arts."

The two colleges will keep their names, Stevens said, and NECI's core mission and endeavor will be unchanged.

"From a student experience, our model will not be changing at all," he added. "It will still be a hands-on experience for students who want to enter the hospitality industry."

The merger will allow students at the either school to take online classes from the other.

A partnership between the colleges was in place before the merger was officially announced.

"The colleges began collaborating in several areas this spring as VMCAD departments work to develop redesign plans for the interior of La Brioche [Bakery and Café], NECI uniforms and NECI marketing materials," the release said.

NECI was founded in Montpelier in 1980 and expanded to Essex in 1989. That campus closed in 2009. The culinary school has about 250 students, said Stevens. VMCAD is similar in size.

Seven Days detailed declining enrollment and revenue at NECI in a March 2014 cover story. Seven Days reported in February 2016 that the school was for sale and in January that the sale was imminent.

Stevens on Thursday said he would not comment on the ownership of NECI.

"Fran said a sale was imminent," Stevens said, referring to cofounder and former president Fran Voigt, who was quoted in the January story. "We said nothing of the sort."

"I'm not addressing a sale, I'm addressing a merger between these two schools," Stevens said. "The merger is two companies forming into one company."