The Vermont Supreme Court voiced skepticism Wednesday about the Attorney General’s Office’s argument that state employees only have to check personal communications accounts for public records when the person requesting them can prove that it’s justified.

Justices had no shortage of questions for either side in a legal battle over how — and when — the state Public Records Act applies to personal emails, text messages or other forms of communication.

Last June, Vermont Republican Party vice chair Brady Toensing sued then-attorney general Bill Sorrell, a Democrat, after he refused to search for and turn over public records stored on his personal accounts that might be pertinent to the Charlotte attorney’s records request. Sorrell’s successor, Attorney General T.J. Donovan, is now defending the office.

Citing privacy concerns, Superior Court Judge Robert Mello sided with the Attorney General’s Office in February, but he also raised the “seriously, and, frankly, disturbing concern” that the ruling would allow public officials to circumvent the public records act by doing government business through personal accounts.

Toensing appealed the decision, and in oral arguments before the Supreme Court Wednesday, he told the justices, “This case is about ensuring an open government.” Several news organizations, including Seven Days, filed a brief in support of his case.

Less than two minutes into his argument, the justices began interrupting with questions.

Newly seated Justice Karen Carroll took issue with the scope of Toensing’s request, which she described as “pretty broad and unspecific” and wanted to know whether he thought state employees were legally obligated to check their personal accounts in response to all records requests.

“Shouldn’t the court balance the privacy interests and decide whether there’s a sufficient reason for the provider of the records to go look in the private areas of its employees?” Carroll wondered.

“I think it depends on what the request is,” Toensing replied.

Would it be enough for employees to sign an affidavit stating they had no such records, Justice Harold Eaton wanted to know. That would be a good start, Toensing told him, noting that the requester could still take the case to court if he or she objected. 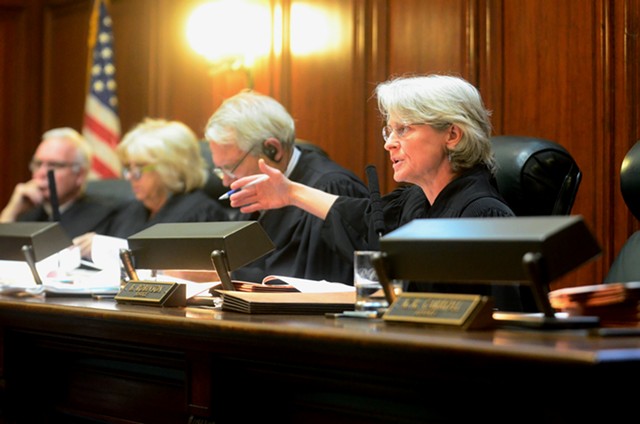 The justices interrupted Assistant Attorney General Benjamin Battles, who was defending the office, even earlier in his argument — a mere 20 seconds into his 15 minutes before the court.

Several of them immediately took issue with Battles’ contention that requiring searches of employees’ personal accounts was “opening the door for significant invasion of privacy.”

The assistant attorney general suggested that, to protect privacy, requesters must demonstrate they have reason to believe employees are keeping public documents in personal accounts to justify such a search. (Toensing claimed that burden would be “unclearable in most cases” and noted that the law puts the burden on the state agency, not the requestor.)

Justice Beth Robinson pointed out that state employees shouldn’t be conducting business on personal accounts anyway. “I don’t understand why asking someone to produce those off their private account is a particularly burdensome thing,” she said.

Eaton expressed a similar sentiment. “Why doesn’t a reasonable search of that response include the agency asking the affected employee, have you ever conducted state business on your state computer? Yes or no?” he said. “What’s the invasion of privacy there?”