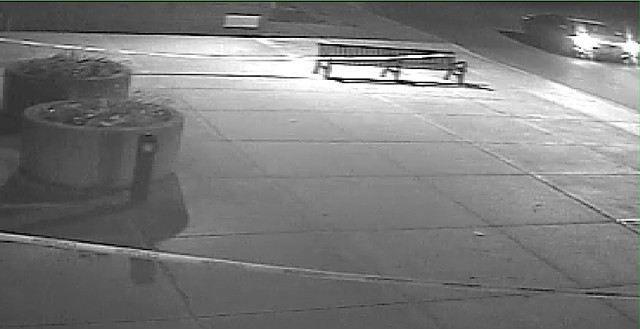 Police asked for the public's help Wednesday to identify a vehicle that was captured on surveillance video and might be connected to the spray-painting of a racial slur on a South Burlington High School athletic field this week.

The images that police released show a light-colored, four-door vehicle with a sunroof parked near the entrance to Munson field on Monday evening. The car entered the high school campus at 11:26 p.m. and stopped in a bus lane next to the field, according to a police press release. At least one individual, wearing a light-colored shirt, got out. The car left the campus about 30 minutes later, police say.

Anyone with information is asked to call South Burlington Police Cpl. Kevin Grealis at 846-4111.

Police Chief Trevor Whipple confirmed Wednesday that the department is investigating the incident as a possible hate crime. He would not say what racial slur was used, or whether anyone specific was targeted.

Through a public records request, Seven Days obtained a police incident report that said the graffiti was spray-painted in white near the 40-yard line and "stretched the majority of the width of the field."

Police redacted many details in the report, including the wording of the racial slur, saying the material was not public under the law. Seven Days appealed the redactions.

The South Burlington school superintendent issued a statement Wednesday to underscore his concern about the incident.

"Hateful graffiti has been found on our turf field. The words used are unacceptable, and we denounce them," the statement read. It also said, "We are working quickly to remove these vicious words. Hate has no place in this district."

Police have been challenged by a spate of incidents that have occurred as the community goes through contentious debate about the retirement of the "Rebels" nickname, Whipple said. "It occupies our time on things we would just really hope people were above," the chief said.

That debate continued as the school district's budget went to a vote for the third time Tuesday night, after weeks of controversy. It passed.

Earlier Tuesday, South Burlington resident Sheldon Katz, 58, was cited to appear in court on charges of aggravated disorderly conduct after a disagreement over the placement of an election-related sign outside Frederick H. Tuttle Middle School as people were entering the building to vote.

According to police, Katz acted in an "aggressive and threatening" manner toward a juvenile.

The juvenile and his or her parent reported the incident. Police said that after speaking with eyewitnesses, they issued the citation for Katz to appear in Vermont Superior Court June 22. Whipple would not identify the juvenile.

Katz did not immediately respond to a message from Seven Days seeking comment Wednesday.

Here's the redacted police incident report on the graffiti incident: