Stiffed? Women Say a Retail Shop That Is Closing Owes Them Money | Off Message

Stiffed? Women Say a Retail Shop That Is Closing Owes Them Money 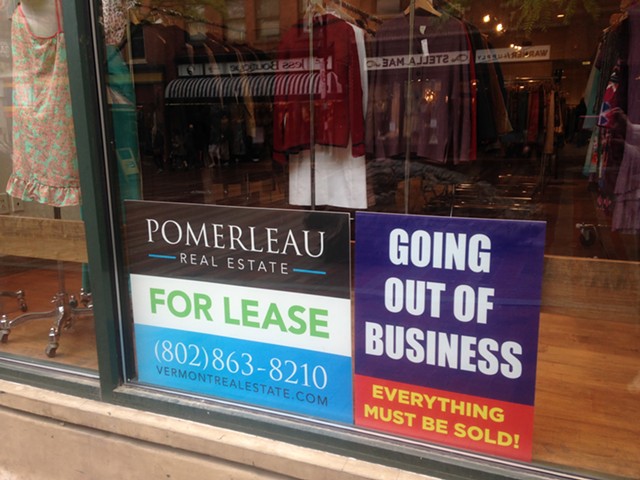 The 2nd Time Around shop will close by the end of the month and might not pay consignors who are owed money for clothing sold at the Burlington store.

The Burlington woman says 2nd Time Around owes her $200 for clothing the store sold on her behalf. So far her efforts to collect have been futile.

"Sometime, maybe around March, they stopped issuing checks," she said. When she asked about it, Taylor was initially told there was a bookkeeping delay. Now she said, "It's pretty clear that that wasn't it."

The store is part of a national chain based in Massachusetts that once had 40 locations in a dozen states. Over several decades it became known for putting a high-end spin on thrift, with sales of gently used designer duds.

But some locations were padlocked this spring, and the company announced over the weekend that all stores would close, including the one in Burlington, due to financial problems.

"Because of a convergence of market forces hitting all brick-and-mortar stores — including increased competition from online retailers combined with skyrocketing rents — we have made the difficult decision to close our stores," a company statement reads.

The store typically pays consignors 40 percent of an item's sale price and keeps the rest. Now that agreement might not be honored.

The announcement on the company website said consignors would be reimbursed for sales that took place after May 1. But money from prior sales might not materialize.

"At this time, the company cannot commit to paying consignors whose items were sold prior to May 1. Further communications will be forthcoming as more information becomes available," the statement advises.

Monday, the Burlington store announced its pending demise with a large "Going Out of Business" sign in the front window.

Inside, a few shoppers looked at frothy summer tops, jeans, boots and soft leather handbags — all gently used. Brands ranged from high-end designers such as Boden and Joie to J.Crew, Ralph Lauren and the more budget-conscious Loft.

Liz Stanley, acting manager of the Burlington store, said Monday she could not comment on the reimbursement problems. A "handful" of employees work at the store along with her, she said, and everyone will be out of a job by July 1 when the business closes.

A liquidation sale could be coming in the next week or so, but hasn't started yet. The closing date isn't yet set. "Our final date is dependent on when we can clear our merchandise," Stanley said.

Taylor visited the store to pick up some of her unsold clothing Monday, and to seek more information on recovering her $200.

When Taylor called the line set up by the company for inquiries about funds owed, she waited on hold only to hear a recording of the statement she'd already read on the company website.

"It was totally unhelpful," said Taylor.

She's not the only upset consignor. Olivia Bartelheim of Burlington is out about $250 for clothing the store sold on her behalf.

“I entered in this agreement with them assuming that it would be honored," she said. "It's very frustrating to me. I feel like I was stolen from." Bartelheim said. "It's bad business practice, very shady.”