Gov. Phil Scott on Wednesday vetoed pending legislation that would legalize marijuana in Vermont. But he promised to work with lawmakers to fashion a new bill that might win his support next month.

“I am not philosophically opposed to ending the prohibition on marijuana,” Scott said at a highly anticipated press conference in his Montpelier office. “However … we must get this right.”

The legislation would have allowed adults over age 21 to possess up to an ounce of marijuana and grow as many as two mature plants per household, starting in July 2018. It also would have created a commission to report back by November with a plan to tax and regulate marijuana sales, as other states have done.

The Republican governor said Wednesday that he would provide legislators with “explicit” recommendations to craft a bill that might meet his approval. He suggested that lawmakers tackle them when they reconvene July 21 for an expected two-day veto session.

The governor’s office later released a list of written recommendations calling for “clear” penalties for the sale of marijuana to minors and the use of the drug in vehicles occupied by children. The list also called for “broader membership” on the commission studying taxation and regulation, as well as more time for it to issue its report.

Senate Judiciary Committee chair Dick Sears (D-Bennington) said he received a verbal outline of the governor's suggestions from Scott’s legislative liaison, Kendal Smith. “It sounds like there’s some room to work with him,” Sears said.

The senator said he had been expecting the governor to veto the bill based on his comments over the last few weeks. “So I’m pleased he’s willing to work with the legislature,” Sears said.

"While I'm disappointed, it could've been a veto and nothing else, so I do see that as an opening," she said.

Sears said that acquiescing to the governor on smoking in cars is unlikely to be problematic but that delaying the commission’s report could be. “I was hoping for something quicker,” he said. “In Massachusetts, they’ll be selling it in July 2018.”

Grad agreed. "I need to think about that," she said.

The House Judiciary chair said that the logistics of moving a new measure through the legislature in two days next month could be a challenge. It would require the Republican minority to agree to suspend legislative rules to speed the process. "I'm hoping [the governor] will work on all sides of the aisle and help us take that path," she said.

But House Minority Leader Don Turner (R-Milton) later made clear that he would not play ball. He said in a statement Wednesday afternoon that he saw “no reason to expedite or circumvent the legislative process by suspending rules” to pass a new legalization bill during the veto session.

"There's a lot of people in our caucus opposed to legalizing marijuana," Turner said later in an interview. "I don't see that changing."

Without the support of a significant number of Turner's 53-member Republican caucus, the House would lack the votes to suspend the rules. Turner said Scott's staff did not seek his support to help advance the legislation this year. "They said, 'We're not asking for anything, but here's what we're doing,'" Turner said. 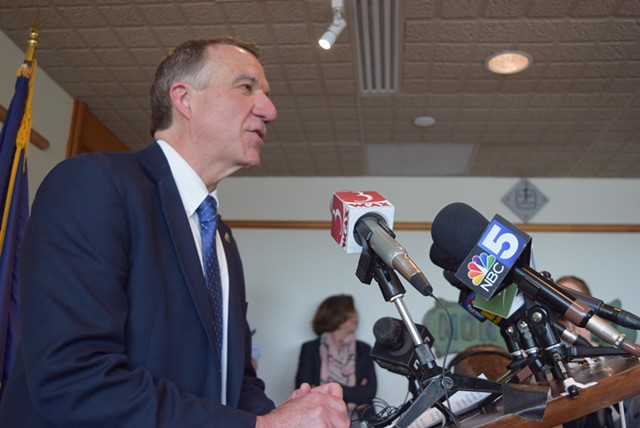 Opponents and proponents of legalization alike lobbied Scott aggressively in recent weeks as they awaited his decision on the bill.

On Wednesday, the Vermont chapter of the American Academy of Pediatrics praised Scott’s veto in a statement. “Legalizing recreational marijuana would have created substantial risks to the health and development of Vermont’s children and adolescents, and normalized the use of the drug in ways that had great potential to increase youth use rates,” the group said.

“I am sad to see the governor disregard the will of most Vermonters and reduce individual liberties in our state,” he said in a statement.

Eli Harrington, a legalization supporter and co-founder of the advocacy organization Heady Vermont, was less optimistic that a new bill could be crafted to meet Scott’s demands. “I think it’s probably pretty doubtful,” he said.

After Wednesday’s press conference, however, Scott’s staff approached both Subin and Harrington and asked if they’d be willing to have a conversation with administration officials about the next steps.

That outreach stands in contrast to Scott’s previous involvement in marijuana legalization. His staff testified before legislators when asked but generally did not get involved in helping them craft a bill that would have been acceptable to him.

The 58-year-old governor, who said he’s never consumed marijuana himself, reiterated Wednesday that he doesn’t see legalization as a priority.

“There’s nothing that says we have to do this,” he said.