Vermont’s 2017 legislative session came to an abrupt and unceremonious end early Friday morning after the House and Senate passed a state budget with broad support and a teachers’ health insurance savings proposal that thrilled nobody. Least of all Republican Gov. Phil Scott, who declared late Thursday night that he would veto both bills approved by the Democratic legislature.

“Please understand it gives me no satisfaction to say so,” Scott told the Senate in a brief adjournment speech to the chamber. “But I truly believe we can eventually find common ground.”

To do so, the legislature will have to reconvene June 21, at which point the stakes will be considerably higher. Without a budget in place by July 1, state government would run out of money, and without the education tax bill, which includes the teachers’ health insurance plan, the state would be unable to collect taxes on residential properties. House Republicans hope to prevent any attempt to override a gubernatorial veto.

What started as a fairly harmonious legislative session devolved into an acrimonious one when, two weeks before lawmakers were scheduled to adjourn, Scott began pushing for a statewide teachers’ health insurance plan that he claimed could save the state up to $26 million. Democratic legislators protested that they didn’t have time to vet the proposal, and they argued that it would unfairly interfere with collective bargaining negotiations already underway in school districts.

Scott threatened to veto the budget, for which he’d previously expressed support, if lawmakers didn’t deliver the health insurance savings he was seeking.

After weeks of negotiating with the governor — and two unplanned session extensions — legislative leaders finally declared an impasse Wednesday afternoon. But by Thursday morning they were meeting with the governor again, and throughout the day there were murmurings in the Statehouse that a deal was finally in the works. 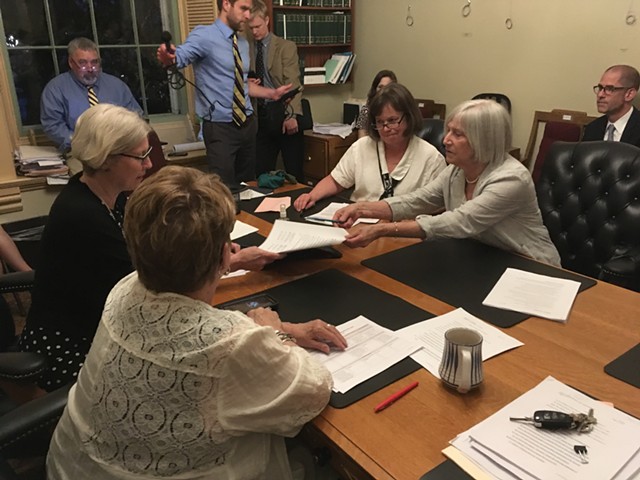 Around 7 p.m., frustrated legislative leaders announced that they’d come very close — but had failed — to find a solution Scott would accept.

The version the legislature settled on reduces the residential property tax bill by one-and-a-half cents. It does so by drawing $6.5 million from the Education Fund’s reserves, with the expectation that those funds will be replenished next year as school districts transition to lower-cost health insurance plans.

“It is our best attempt to meet another branch of government well beyond halfway,” Senate President Pro Tempore Tim Ashe (D/P-Chittenden) said before the Senate vote.

House Speaker Mitzi Johnson (D-South Hero) told Democratic House members that Scott changed course at the last moment. After the governor made one supposedly final demand, she said, “The Senate and I, after a long day of back-and-forth and checking in, the pro tem and I went back to the governor, saying, ‘OK, we can do the last thing we all put on the table.’ We heard, ‘And I just need this one more piece’ ... It was the piece that all along we were saying we just can’t do.”

To override a gubernatorial veto, legislators would have to win two-thirds majorities in both chambers.

House Democrats asked few questions during their meeting before the floor vote, and House Republicans simply decided they would vote against it after hearing the plan had failed to win the governor’s support.