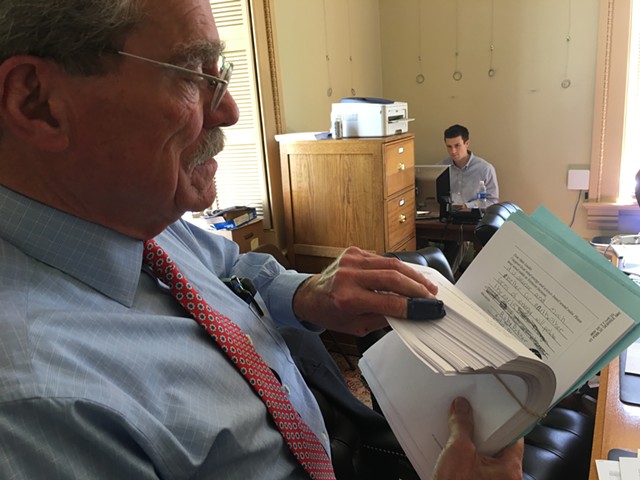 This week, the Vermont Public Service Board issued new noise standards for utility-scale wind projects in Vermont. Wind advocates slammed the rules as amounting to an effective ban on new wind farms. Opponents welcomed the guidelines as a step in the right direction, but they would prefer even tighter restrictions.

The rules would impose a 42-decibel daytime noise limit and a 39-decibel limit at night. There would also be a setback requirement of 10 times the turbine's height, meaning that a 500-foot-high turbine would need to be sited at least 5,000 feet away from any occupied building.

The PSB issued a set of draft rules in March, and then held a series of public hearings. The final standards are essentially the same as the draft version; the biggest change is that the nighttime limit was increased from 35 decibels to 39.

Before they can take effect, the rules must be approved by the Legislative Committee on Administrative Rules. The panel will consider the rules at a June 8 hearing. Sen. Mark MacDonald (D-Orange), the committee's chair, expects a large crowd that day. But he cautions that LCAR's authority is limited.

"We're homework checkers, we're not a policy committee," he said. "If we think the rules are bad policy, but they are authorized by statute, the public process has been engaged in, they are clear, there's no question that they go beyond the authority set forth in statute, and we just don't like 'em, by virtue of being on that committee and following that committee's protocol, our hands are tied."

Wind advocates believe that they have an argument for rejecting the rules within LCAR's limited purview.

"LCAR's job is to review this and determine whether it meets statutory intent," said Sarah Wolfe, clean energy advocate for the Vermont Public Interest Research Group. "We clearly think that [the rules] are both out of step with what the legislature intended and out of step with Vermont precedent in how we make laws and rules."

Wolfe points to a passage in a letter released by the PSB alongside the new rules, which explained the board's response to public input on various issues. It expressed the board's intent to "reduce annoyance levels that some people might experience from turbine sounds."

She said the idea of reducing "annoyance" that might be subjectively felt by "some people" is a standard far beyond the PSB's rulemaking power.

"They are clearly prioritizing a vocal minority over the public good of the state, and I think that does overstep their authority," Wolfe said.

For her part, anti-wind advocate Annette Smith of Vermonters for a Clean Environment is not planning to contest the rules before LCAR, although she and her allies are likely to attend the June 8 hearing.

"It's very clear that VPIRG and [Renewable Energy Vermont] are going to launch a war at LCAR," Smith says. "I do not want to see this rule gummed up, so I am being a realist here. I'm saying it ain't perfect, I would love to see it changed, but let's get it in place and see what happens."

Whether it will be "war" or not, the LCAR hearing is the last opportunity for wind advocates to block the rules. And they say the stakes are very high.

"This is a functional ban on wind," says Wolfe, "and it is unsupported by the evidence and by Vermont precedent on how we make policy in this state."

According to Renewable Energy Vermont, the setback requirement alone would forbid wind development on 99.8% of Vermont's land. Since only a fraction of Vermont is suitable for large-scale wind, there's no guarantee that any of the remaining 0.2% includes any good sites. It may be lowland or swamp, or forest too distant from road access and transmission lines.

"This is really a ban on wind," said developer David Blittersdorf. "I am going to have to stop any development [in Vermont] if this goes through."

Which would probably be fine with Smith, who sees wind as problematic in Vermont. She cites the state's rugged terrain as creating dramatically uneven noise impacts, and depicts turbines as an intrusion on rural areas.

Whatever LCAR decides, it's almost certain that the debates will continue. If the rules take effect, wind advocates may take the issue to court. Otherwise, they could lobby the legislature for changes in the law. As for wind opponents, they see the need for even more stringent standards, and are unlikely to be permanently satisfied by the PSB rules.