Budget Standoff Escalates Between Scott and Vermont Legislature | Off Message

by Alicia Freese and Terri Hallenbeck As their extended stalemate with Republican Gov. Phil Scott dragged on another day, Democratic leaders of the Vermont legislature put their foot down Thursday — sort of.

Johnson and Ashe characterized their plan, which would require the savings but allow school districts to determine how to achieve them, as a "compromise." But it was, in fact, a repurposed version of the same proposal Ashe had offered the governor a day earlier. On Wednesday, the administration rejected Ashe's idea within a few hours. But on Thursday Scott sounded somewhat more amenable, telling reporters later that afternoon that he would offer a counterproposal to their counterproposal to his proposal. Throughout the day, Ashe refused to release a copy of his original plan — even after Scott's staff made their rebuttal public Thursday morning.

The pro tem told the Senate late Thursday afternoon that it would vote on the plan Friday at 9 a.m. Johnson said the House would also hold a vote that day but wouldn't specify when. They both suggested that they'd waited long enough for the governor to come around, but they also hinted that, perhaps, they could still find common ground.

"We continue to believe that we might be able to reach agreement, although frankly the avenues are getting narrower and narrower," Ashe told his fellow senators. 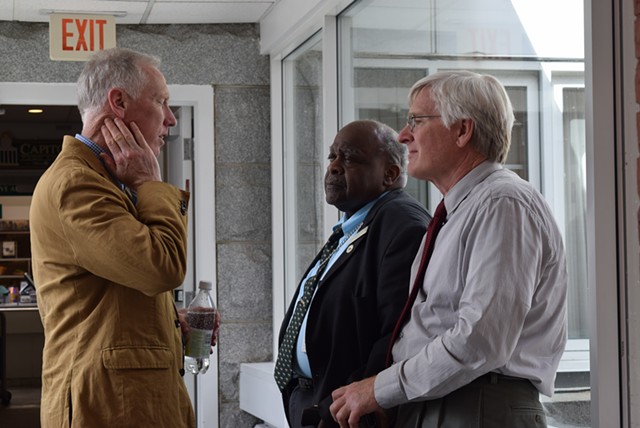 News of the not-so-new proposal broke earlier Thursday afternoon at a meeting of House Democrats. Reps. Dave Sharpe (D-Bristol) and Janet Ancel (D-Calais) unveiled the repurposed plan, saying it would reduce residential property taxes by 3 cents per $100 of assessed value. "We're going to return it directly to the taxpayer," Sharpe said.

Addressing reporters immediately after the caucus meeting, Speaker Johnson struggled to clarify what would happen next. "I'm not sure who votes first and exactly how that all plays out, but I feel this is the thing that gets us closer." She criticized the governor for repeatedly changing the parameters of the negotiations.

A mob of reporters surrounding her then moved upstairs and waited outside Scott's ceremonial office for him to come out. Shortly thereafter, Ashe and Sen. Dick Mazza (D-Grand Isle), an ally of both the pro tem and the governor, slipped into Scott's office. After several minutes, the senators departed through a hidden backdoor into the Cedar Creek Room, bypassing the reporters. 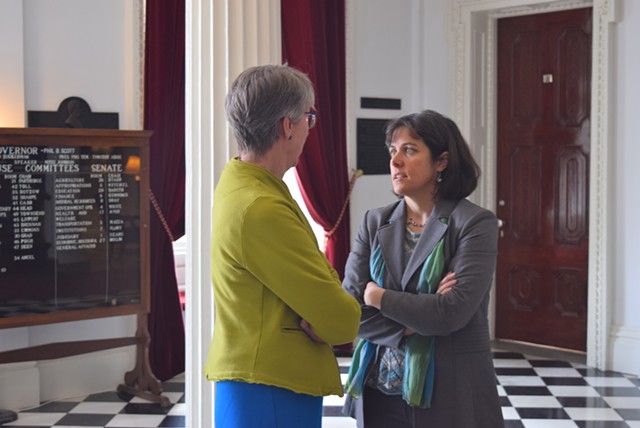 Scott then emerged through the main entrance with the vague declaration that, "We are going back with a counterproposal that will probably have some other words added to it."

One of those words, he said, would be "shall." Whereas the legislature's proposal suggested that districts could save by adopting an 80/20 premium split on a specific health insurance plan, Scott said he wanted to mandate that, by replacing "can" with "shall." Democratic leaders, who've insisted that the state must not disrupt the collective bargaining process, appeared unlikely to agree with that.

Minutes after Scott's declaration, Ashe and Johnson conferred behind closed doors in the Senate Cloakroom, while Republican senators stood outside grumbling about being kept in the dark. Then, the pro tem entered the Senate chamber to announce the upcoming vote. The legislature's plan, he said, would result in savings "in a more guaranteed way" than the governor's own proposal.

He went on to suggest that Scott was trying to commandeer the budget process for an unrelated political purpose. "We had never entered the budget discussions … thinking that the budget would be held up over a discussion about changing collective bargaining," Ashe said. "Which is now what seems to be the thing that is the holdup." Before lawmakers left for the night, Sen. Kevin Mullin (R-Rutland) tried to get a little more clarity. "Should one attempt to find housing for tomorrow night?" he asked Ashe. "Is the goal to be out of here tomorrow night?"

The pro tem's unhelpful response: "That's a problem of other people's making. Other people can answer how and if it will be solved."