The Vermont House on Wednesday voted to legalize marijuana possession, a miraculous revival for legislation that appeared just days before to be going nowhere fast.

“Vermont lawmakers made history today,” declared Matt Simon, New England political director for the pro-legalization Marijuana Policy Project. “There is no rational reason to continue punishing adults for consuming a substance that is safer than alcohol.”

The 79-66 vote means the bill, already approved by the Senate, goes next to Gov. Phil Scott. Asked Wednesday what he would do — sign, veto or let the legislation become law without his signature — the governor declined to say.

“I don’t believe this is a priority for Vermont,” the first-term Republican governor said, reiterating his concern that there is no roadside test to detect drivers impaired by marijuana. The bill, S.22, would legalize possession of up to an ounce of marijuana and home growing of up to two mature and four immature plants for adults age 21 and over. It would go into effect July 2018.

Rep. Maxine Grad (D-Moretown), chair of the House Judiciary Committee, argued that legalizing possession would allow the state to direct public safety resources toward more pressing matters. “Too many Vermonters feel like criminals,” she said, terming the measure “a criminal justice bill.”

The legislation would create a study commission to look at how Vermont might tax and regulate legal sales of the drug. Grad argued that Vermont must be prepared as legal pot sales take effect in neighboring Massachusetts in mid-2018. The nine-member commission would be directed to take into consideration public safety and health, she said, calling that an important factor in winning her support. “I, too, am worried about highway safety,” she said. 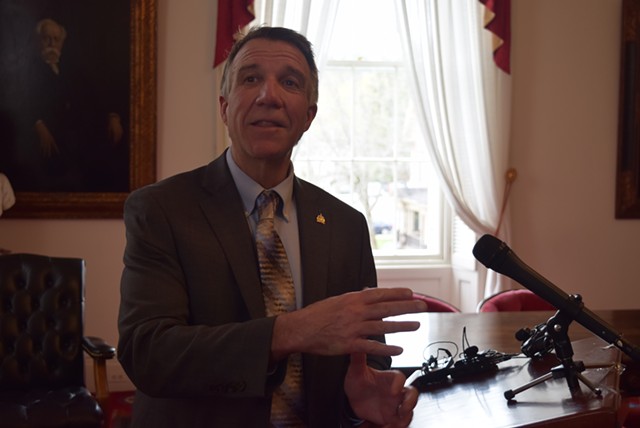 If Scott signs the bill, Vermont would become the first state to legalize marijuana via legislation rather than a public referendum. For supporters, that’s a significant hurdle they hope will encourage other states to follow.

“I think this is amazing,” said David Silberman, a Middlebury lawyer who has been lobbying for legalization. He contended that legislators tend to be more conservative than the public on social issues. “To be able to get, particularly older legislators, to lay aside decades of drug-war indoctrination and focus on what’s really going on.”

Sen. Chris Pearson (P/D-Chittenden) is among the supporters who had been advocating to also legalize marijuana sales, but he considered Wednesday’s vote a significant step. “It’s been a steady succession toward treating marijuana like alcohol,” Pearson said. “I’m proud of the legislature for taking this courageous step.”

Just days earlier, the legislation appeared to be dead for the 2017 legislative session, which is scheduled to end this week. The House had struggled to muster the votes earlier this year for a similar version that would have legalized possession in July 2017. That bill finally passed the House last week but came too late to meet the Senate’s deadline to consider House bills.

An antsy Senate, where legalization has wider support, responded by sending over a revised version last week as an amendment to another bill. The new version delayed enactment until 2018 and added the study commission.

If the session had ended last week as initially planned, the bill likely would have gone untouched. But lawmakers extended the session into this week to work out budget differences with the governor. In the meantime, the new version won more supporters in the House, passing Wednesday by a wider margin than the earlier bill did.

Rep. Laura Sibilia (I-Dover) voted nay on the first bill but said yes to Wednesday’s version. She said she was swayed by its call for a commission, which she feels will help the state prepare for legal marijuana sales in neighboring Massachusetts. “I think the commission is sensible,” Sibilia said.

The study almost led Rep. Tom Burditt (R-West Rutland), a supporter of the earlier version, to vote against this one. He said he initially feared the commission would force Vermont toward taxed and regulated legal marijuana. He changed his mind after reading the bill several times. “There’s a commission in there, but they can’t do anything without the legislature,” Burditt said.

House Minority Leader Don Turner (R-Milton) remained a vehement opponent. As Milton fire chief, he said he has responded to several car crashes caused by impaired drivers. On the House floor Wednesday, he cited an Interstate 89 crash last fall in which a wrong-way driver killed five teenagers. Though toxicology reports have not been publicly released, Turner said “it’s well established” that marijuana was a factor in the crash.

Afterward, he conceded that he shouldn’t have relied on unverified information. Much of the reporting on the toxicology reports has cited anonymous law enforcement officials.

“If I had it to do over again, I might not do that,” he said. “I was cranked up. Come with me one time to an accident and see.”

Rep. Patrick Brennan (R-Colchester), chair of the House Transportation Committee, said that if the bill becomes law he would work on legislation next year to help train more police officers as drug recognition experts. He would also work to supply police with saliva tests for suspected drugged drivers. “In that respect, I’m happy they put it out to 2018,” he said.