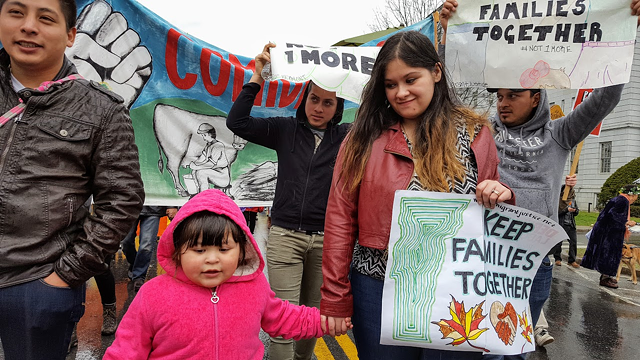 An undocumented Migrant Justice advocate arrested in Burlington has been sent back to Mexico. Cesar Alex Carrillo, 23, accepted a "voluntary departure order" and took a plane out of the U.S. on Monday, according to his attorney, Matt Cameron.

Carrillo, who was arrested by ICE agents in March, fought to get a voluntary departure in lieu of formal deportation as a way of maximizing his chances of returning to the U.S., Cameron told Seven Days. A judge approved the agreement May 1, said Migrant Justice spokesperson Will Lambek.*

It made for "the best possible scenario," Cameron said, because a voluntary departure does not carry the tarnish of a deportation. Carrillo hopes to get legal clearance to return to Vermont by the end of the year — though the process may take longer, Cameron added.

Carrillo's wife, Lymarie Deida, 21, and his 4-year-old daughter Solmarie, are both U.S. citizens. They are scraping together money to join Carrillo in Mexico in the coming weeks, said Lambek. Carrillo hails from the Mexican city of Tabasco, though Lambek said he did not know where the family would live.

"We're going to continue to support Alex and his family so that they'll be reunited and be back in this community," said Lambek. "His removal today is a really sad chapter in what's been a tragic story of ICE targeting activists."

Immigration and Customs Enforcement agents detained Carrillo in March as he showed up at the Chittenden County courthouse for a DUI hearing. The misdemeanor charge was eventually dismissed.

Enrique Balcazar and Zully Palacios were also arrested in Burlington that same week. They were released on bail and will face deportation proceedings in March 2018, Cameron said.

Because of the DUI charge, a Boston immigration judge ordered that Carrillo be held without bail. He had been detained at a Massachusetts jail. Upon returning to Mexico, Carrillo could be subject to a 10-year ban from entering the U.S. — unless he can prove that being away from the states would cause "significant hardship."

Carrillo has already had his marriage visa approved, but he next must file in Mexico for an immigration visa and a "hardship waiver" to have a chance of returning to Vermont, Cameron explained. "I don't think it has to be explained, with a 4-year-old and a mother that's completely dependent on his income," the attorney said.

Carrillo, who has been in the U.S. for seven years, is lucky he's married to a U.S. citizen, Cameron said. For most immigrants here without documentation, there is no path to citizenship. Many people don't understand that "there are no papers to file, there are no lines to get in, there's no way for people to become legal in Vermont," Cameron said. "There is no process."

*Correction, May 9, 2017: A previous version of this story incorrectly reported that Carrillo bought his own plane ticket. He did not.