Welch Votes ‘Hell No’ on Obamacare Repeal | Off Message 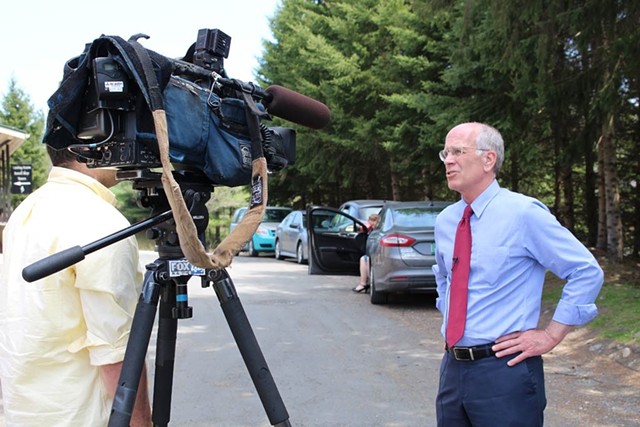 Calling it a “dark day in the history of the United States Congress,” U.S. Rep. Peter Welch (D-Vt.) on Thursday voted against a repeal of the Affordable Care Act, better known as Obamacare. But by a narrow vote of 217 to 213, Republicans prevailed in their months-long quest to pass the American Health Care Act, a top priority for President Donald Trump.

Speaking on the floor of the House earlier Thursday, Welch said, “President Trump was elected by rural America. This bill betrays rural America.” He said the legislation would cause more than 23 million Americans to lose their health insurance coverage, discriminate against those with preexisting conditions and serve as a tax cut for the wealthy.

On social media, Welch said he planned to vote “hell no” on the repeal. Following the vote, he said in a statement, “I am hopeful the Senate will scrap this trash and start from scratch.”
The legislation would dismantle the health insurance exchanges created by the Affordable Care Act, roll back state Medicaid expansions and eliminate tax penalties for those who do not purchase insurance. It would provide some families tax credits to help buy policies. States would be permitted to opt out of minimum coverage requirements that prevent insurance companies from charging sick patients more than healthy ones.

Though Trump and his House Republican allies celebrated the vote Thursday afternoon in the White House Rose Garden, the legislation has a long way to go before it is signed into law. Some Senate Republicans have expressed opposition to the bill — as have some GOP governors.

Speaking at an unrelated press conference Thursday afternoon at the Vermont Statehouse, Republican Gov. Phil Scott said he had “grave concerns” about the bill.

“If it was passed the way it’s been portrayed to me, I think it would be detrimental to Vermont,” he said, acknowledging that he was not familiar with all of its details. He said he hoped the Senate would negotiate a better plan.

Vermont’s two U.S. senators blasted the bill after it passed the House.

Sen. Bernie Sanders (I-Vt.) called it “an absolute disaster” and said Americans must rally to ensure that it doesn’t pass the Senate.

“It really has nothing to do with health care,” Sanders added in a written statement. “It has everything to do with an enormous shift of wealth from working people to the richest Americans.”

For his part, Sen. Patrick Leahy (D-Vt.) called the bill “a cruel and cynical hoax.”

“I will do all I can to prevent Senate action on this disastrous plan, or on anything that comes close to it,” he said in a statement of his own.