After Months of Delays, House Backs Marijuana Legalization | Off Message

The Vermont House debated late into the night Tuesday before finally backing — in a close vote — a bill to legalize marijuana.

Lawmakers supported the legislation by a 74-68 tally in a vote taken around 11:30 p.m. — some four hours after the issue was first presented on the floor.

"All this leads to savings in our corrections and judicial systems," said Rep. Tom Burditt (R-West Rutland). "Let's end prohibition."

The action comes after months of delays that make it likely too late to pass in the full legislature this year, as lawmakers are expected to adjourn for the session later this week. But supporters see any action as progress toward their goal.

The bill, H.170, would allow adults to possess up to an ounce of pot. It would also allow for adults to grow two mature marijuana plants and four seedlings per household. The legislation would not allow for marijuana sales or commercial growing, a key difference between bills presented in the two Statehouse chambers.

The Senate earlier this year voted for a legalization measure that would tax and regulate the drug by allowing for retail marijuana shops and commercial cultivation. But House members refused Tuesday to go along with an amendment from Rep. Jean O'Sullivan (D-Burlington) that mirrored the Senate bill.

"I think this is a very thoughtful approach," O'Sullivan said. "We have to do something. We are surrounded by an entire country that wants to legalize and two states that have." 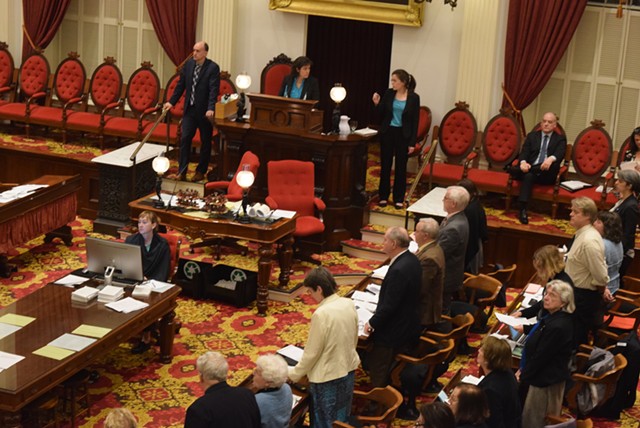 The House bill that did pass, modeled on the policy used in Washington, D.C., was intended to be a compromise that would remove penalties for casual marijuana users.

Some lawmakers argued that the bill needed to include more precautions, including greater assurance that drugged drivers could be detected.

"We bear some measure of responsibility for whether we are protecting Vermonters as they use the highway," said Rep. Cynthia Browning (D-Arlington). "Before we let legalization go into effect, please require that we have these protections."

"The problems we have with impaired driving and marijuana use exist now and that doesn't seem likely to change a whole lot," countered Rep. Chip Conquest (D-Newbury).

Rep. Paul Poirier (I-Barre) said he changed his mind about supporting the House bill after hearing this week from constituents angry about the deaths of three people reportedly killed this year in drug-related car crashes.

Rep. Peter Fagan (R-Rutland) unsuccessfully tried to delay the bill by contending it was too permissive.

"Just how much marijuana can one household grow in one year?" he asked. "There is nothing small about the amount we are talking about here."