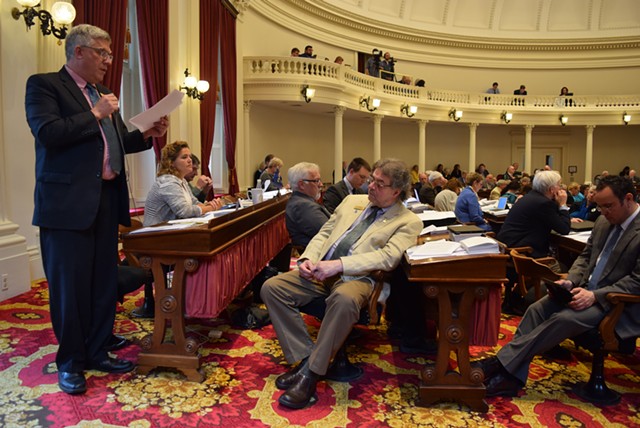 The House voted 89-57 on Tuesday for a program that would provide Vermonters up to six weeks of paid family leave by requiring workers to chip in.

The bill is not expected to pass the full legislature before lawmakers adjourn for the year, likely later this week. House Democrats nonetheless chose to tackle the issue as part of a packed agenda Tuesday so that the bill will be ready for possible Senate action when legislators return next January.

Supporters touted paid family leave as good for both the economy and workers' well-being.

"Taking unpaid time is usually unaffordable," said Rep. Tom Stevens (D-Waterbury). "We received testimony from a young mother of two who was required to return to work within two weeks after her C-section."

The legislation generated strong opposition from those concerned about mandating new costs. Rep. Anne Donahue (R-Northfield) tried to make the program voluntary, but her amendment was defeated, 88-57.

"With great caution do we force people to get insurance," Donahue told fellow Republicans in an afternoon caucus meeting. "Even car insurance, it's the liability that's mandatory, not the protection of your own property."

Gov. Phil Scott has said he opposes any such program with a mandatory tax but would consider supporting a voluntary system. Stevens argued that a voluntary program would cost an estimated eight times more than one that includes all employees.

The House-passed bill would require employees, except for those who are self-employed, to put 0.141 percent of their pay into the program. Employees with a newborn or adopted child, or those taking care of a sick relative, would then be eligible to take up to six weeks of time off and continue receiving 80 percent of their pay.

Rep. George Till (D-Jericho) told fellow House members that the legislation would amount to a $70 a year deduction for someone making $50,000 a year.

The program would cost an estimated $1.2 million to administer, an amount that would come from the payroll tax.

Supporters argued the program would attract young families to Vermont, providing a much-needed shift in the state's aging demographics.