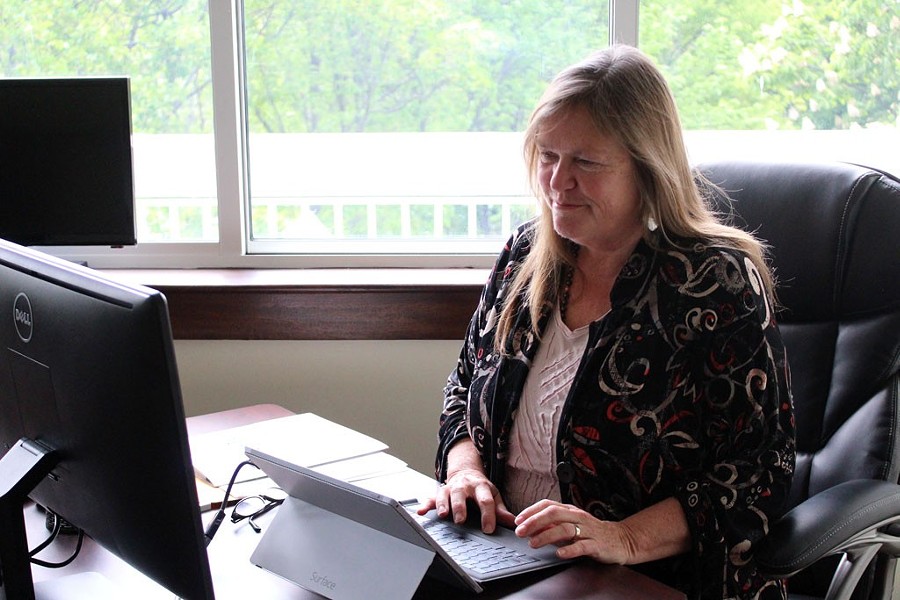 Sara Adsit-McCuin, who served on the defunct college's board for roughly three years, said Friday that she was contacted by the Federal Bureau of Investigation "a couple of weeks ago." During an in-person interview, two FBI agents focused their questions on Burlington College's 2010 purchase of a 32-acre campus overlooking Lake Champlain. At the time of the deal, O'Meara Sanders was serving as the college's president.

"I didn't give them any information that they didn't already have," Adsit-McCuin told Seven Days.

Carol Moore, a former president of the college, told Seven Days that she, too, had been contacted "three or four weeks ago" by an FBI agent. He confirmed to her that "this is an ongoing investigation," Moore said.

The existence of the investigation was first reported Thursday by VTDigger.org, citing email correspondence between the Vermont Agency of Education, Burlington College and federal officials. Those emails confirm that the investigation was active at least through February. The FBI's recent contact with Adsit-McCuin and Moore suggests that it continues.

Neither the FBI nor the Department of Justice has confirmed the existence of an investigation. Spokespeople for the FBI's Albany, N.Y., field office, which has jurisdiction over Vermont, and the U.S. Attorney for the District of Vermont declined to comment Friday. Neither O'Meara Sanders nor Bernie Sanders' Senate office responded to requests for comment.

In January 2016, Vermont Republican Party vice chair Brady Toensing filed a complaint with the U.S. Attorney's office alleging that O'Meara Sanders had overstated fundraising commitments when applying for a loan to buy the new campus. Toensing alleged that she had misrepresented $2 million worth of pledges in order to borrow the $10 million necessary to finance the deal.

"I believe that's what instigated everything: that formal complaint," Burlington College board chair Yves Bradley said Friday. He said that while he had not been contacted by federal officials, he learned of the FBI investigation months before the college closed under financial duress in May 2016.

According to Coralee Holm, Burlington College's former dean of operations and advancement, federal investigators have focused their attention on fundraising related to the 2010 land deal. She told Seven Days Friday that the FBI subpoenaed the college in February 2016 and interviewed her on campus at least four times over the next several months.

"I cooperated with their request, which was to provide any documentation that pertained to the purchase of the new property as it related to fundraising for that property," she said.

Moore, who was Holm's boss at the time, was aware of the FBI's interest. She said it was clear from the start what the bureau was investigating: "Was there any collusion between Jane Sanders and the bank? Did she falsify records in order to get the loan from the bank?"

Holm said she provided the FBI a filing cabinet and three or four banker boxes filled with donor files. At the bureau's request, she searched email accounts that previously belonged to O'Meara Sanders and Christine Plunkett, who served as O'Meara Sanders' chief financial officer and then succeeded her as president. Holm said she transferred those and other electronic files to a hard drive provided by the FBI.

Asked if she found anything noteworthy in O'Meara Sanders' emails, Holm said, "I prefer not to comment on that."

While searching for information to aid the FBI's investigation, Holm said she had been "unsuccessful in locating documentation of the gifts and pledges" O'Meara Sanders represented in the loan application she signed.

Holm said the FBI assured her that the college itself was not the subject of its inquiry.

"They were not looking at the college as the party under investigation," she said.

Holm, who was hired by Burlington College in the fall of 2012, said that she had never spoken to O'Meara Sanders about the matter. But she said that O'Meara Sanders' daughter and Sen. Sanders' stepdaughter, Carina Driscoll, had requested that the college keep the family apprised of any developments that might attract press scrutiny during the senator's 2016 presidential campaign.

Driscoll, a former Burlington city councilor and state representative, runs the Fairfax-based Vermont Woodworking School, which was affiliated with Burlington College during her mother's tenure as president. Driscoll declined to comment.

"Carina was very quick to want to be knowing if anything came up," Holm said. "We were getting calls from the press. People were making inquiries, so we did make the campaign managers of the [presidential] campaign aware of that, and we kept Carina apprised at the time, but we did not go into any detail."

Holm said the college reached out to the campaign "on at least three occasions" but never informed the Sanders family or campaign about the subpoena.

Reached Friday, Toensing said he was "happy" that federal officials appeared to have taken his complaint seriously.

"In our system, nobody should be above the law, and it looks like the feds are taking a close look," he said.

Corrected at 6:14 p.m.: An earlier version of this story misspelled Adsit-McCuin's name.