Walters: ‘Plenty of Time’ for Scott’s New Plan | Off Message 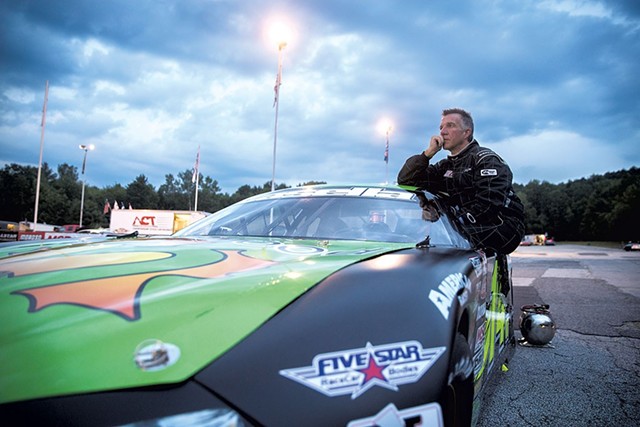 Gov. Phil Scott is continuing to promote his proposal for statewide negotiation of teacher health insurance plans, even as he looks ahead to his first return to the racetrack since taking office. At a Wednesday press conference, Scott brushed aside legislative complaints that his plan arrived far too late in the session for full consideration.

“I think there’s plenty of time,” he said. “I’ve been around this building for 16 years. We’ve done more dramatic things at the end of the session than this.”

The first-term governor also believes there’s plenty of time for a return to auto racing. The season begins this weekend at Barre’s Thunder Road SpeedBowl with a car show and open practice on Saturday and the first race of the year Sunday afternoon.

“I’m hoping to go to at least practice, go to the car show and maybe practice on Saturday,” he said. As for racing on Sunday, “It depends on how well I do on Saturday ... If I race, I want to be competitive.”

One could question Scott’s priorities, with the legislature planning to adjourn just a week later, on May 6. But, after all, “there’s plenty of time.”

And the Democrats are playing defensive backfield.

Scott pegs potential savings from his plan at $26 million, though during Wednesday’s press conference he repeatedly said $25 million. In either case, he told reporters, “I’ve been in this building — at times I think we’ve been here until June — for a lot less money. When you think about $25 million, it may cost us $250,000 a week to stay here, but the rate of return is pretty good.”

Which may be, but majority Democrats in the legislature have their doubts. At a Wednesday morning session of the tax-writing House Ways and Means Committee, questions were rampant and answers were in short supply. How real is the $26 million? Out of whose pocket will it come? How exactly will the savings be disbursed?

Rep. George Till (D-Jericho) asked whether Scott’s plan would leave teachers with poorer coverage. “Will people not get the ongoing care they need?” he asked. “That $26 million is health care the teachers will not be getting.”

Scott asserted that the plan was no surprise — that the Vermont School Boards Association had been promoting it since January. When asked why it took him so long to formally embrace the idea, he claimed that he spent the time “building consensus.”

“I’ve learned in this building, if you do things by consensus, it’s more worthwhile,” he explained. But when time grew short, he added, “it didn’t appear that anyone was moving forward on it,” so he decided to publicly put his weight behind the plan.

That was presumably news to legislative leaders. If they were included in the consensus-building effort, they are hiding it well.

“I think, you know, I understand the position they’re in,” he said of the Democrats. “Certainly the NEA isn’t happy about this initiative, but when I talk with taxpayers, there’s a lot of interest in this initiative.”

When a reporter noted that Scott had failed to answer the question, he said “I think it’s a better question for them,” meaning Democratic leaders.

While Scott continues to beat the drum for his plan, the legislature continues to steam toward adjournment. On Wednesday, the Vermont Senate approved the major tax and budget bills on unanimous votes.

The quick action leaves time for House and Senate to work out their differences by the end of next week. They seem determined to leave Scott’s late entry in the 2016 Legislative Grand Prix stuck in the pits, without even getting to rev up its engine.