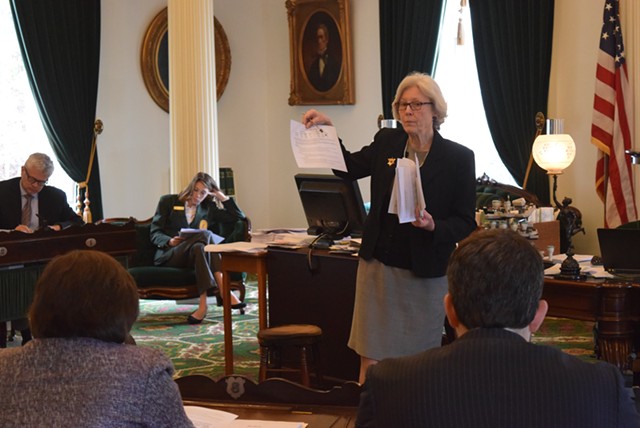 With a 30-0 vote, the Vermont Senate unanimously stood behind its $5.8 billion budget proposal Wednesday, setting the stage for possible legislative adjournment by the end of next week.

The Senate’s budget includes a few key differences from the version the House passed last month, meaning the two chambers will have to hash it out. Those negotiations are expected to start Friday, clearing the way for the session to adjourn a bit early.

The conference committee will pit Kitchel against her sister, House Appropriations Committee chair Kitty Toll (D-Danville), who is in her first year in that role.

Toll’s proposed House budget passed in March by a 143-1 vote. As her committee started delving into the details of the Senate’s budget Wednesday afternoon, Toll said that the unanimous support her sister’s budget won surprised her. “I am just floored,” she said.

Among the chief differences in the Senate’s proposal is a shift of $7.9 million in teachers’ retirement expenses from the general fund to the education fund. The move is meant to allow the Senate to fund other general fund priorities.

The shift will be among the sticking points when House and Senate budget negotiators meet. Income taxes pay for items in the general fund, while property taxes pay for education fund expenses. Toll, for her part, said, “I’m very concerned about putting any additional pressure on the property tax.”
Count Gov. Phil Scott among those also wary of the move. He argued that the shift can’t be made unless other programs paid for from the education fund are cut to make up for it.

“We have to backfill it some way,” he said.

Kitchel stood by the proposed shift, saying that teachers’ retirement costs are a legitimate education expense because they are driven by local school district decisions.

The assumption that it will result in an increase in property taxes is “tenuous,” Kitchel said. Anticipated increases in sales tax from Amazon online purchases and savings in teacher health insurance costs could help offset the $7.9 million, she said.

Among other key Senate budget items that are at odds with proposals from the House and governor:

*Correction, April 27, 2017: A previous version of this story miscalculated the magazine’s total deficit.