House Nixes Lottery-Liquor Merger, But Senate Has Other Plans | Off Message

House Nixes Lottery-Liquor Merger, But Senate Has Other Plans

Who holds the power in the Vermont Statehouse? The House, the Senate or the governor? That appeared to be the question in play Wednesday.

By an 82-63 vote, the majority Democratic House stood up to Republican Gov. Phil Scott by defeating his executive order to merge the state Lottery Commission and the Department of Liquor Control.

House members said they like the idea of merging Lottery and Liquor — they just don’t trust the governor enough to let him do it without their input.

“These are great goals,” said Rep. Helen Head (D-South Burlington), chair of the House General, Housing and Military Affairs Committee. But she added, “There is not enough detail.”

But if the Senate has its way, the merger still could happen.

Scott signed the executive order shortly after taking office in January. Without objection from the House or Senate, it would have gone into effect on Monday.

Head complained that by choosing an all-or-nothing executive order, the governor left the legislature out of any decisions. At the same time, she argued, Scott failed to supply details about how the merger would save money or how buildings and staff would be shared.

House members plan later this week to pass a different bill that would set up a working group to decide by next January whether, and how, Lottery and Liquor should be combined. 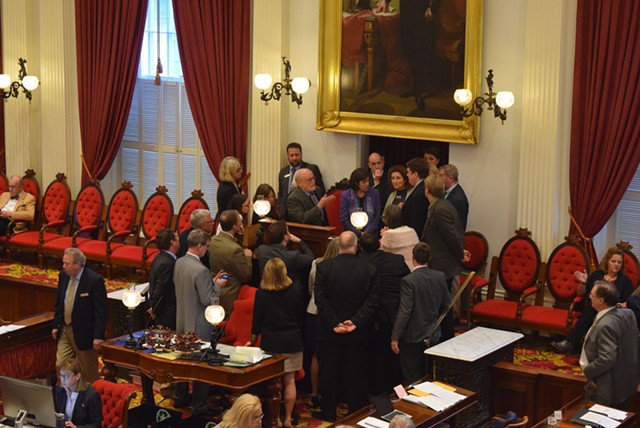 Scott’s staff, meanwhile, circulated a memo to House members offering details. The governor would save $750,000 by contracting out operation of the liquor warehouse and he would generate $3 million in new lottery revenue. His plan depends on boosting use of lottery game consoles in bars, which lawmakers have been reluctant to do. No jobs would be cut, but some would eventually be pared through attrition, according to the memo.

Wednesday’s House debate never focused on the ethics of drawing more money from lottery games. It was all about the process.

House Republicans tried, to no avail, to argue that delaying the merger made no sense.

“Any time efficiency in state government can be realized … it should go forward,” said Rep. Mark Higley (R-Lowell).

But House Democrats’ plan for a working group study on a merger is headed for a roadblock in the Senate, which has its own plan to help Scott go ahead with his order.

“We believe now is the time to do it,” said Sen. Kevin Mullin (R-Rutland), chair of the Economic Development, Housing and General Affairs Committee.

His committee plans to insert wording into a House bill that would merge the two state agencies. The added language says that a merger would be more efficient and produce “significant savings,” but offers no specifics for how the Scott administration should go about making that happen.

Putting the merger into an otherwise uncontroversial bill that makes technical changes to the state’s liquor laws likely means the House and Senate will duke out the details in an end-of-session conference committee. The governor likely will not be far from that debate.

“It’s not over ’til we adjourn,” Mullin predicted.

The Liquor-Lottery merger was one of three executive orders Scott signed. It was the Senate that acted to defeat another, which would have merged the Agency of Commerce and Community Development and the Labor Department. As for the third order, legislators signaled Wednesday that they are likely to let it take effect without complaint. That one would create an Agency of Digital Services to oversee state information technology functions, an issue that has long vexed governors and legislators. “We didn’t know if we could do any better,” said Rep. Steve Carr (D-Brandon), chair of the House Committee on Energy and Technology. “I think their plans seem to be reasonable plans.”