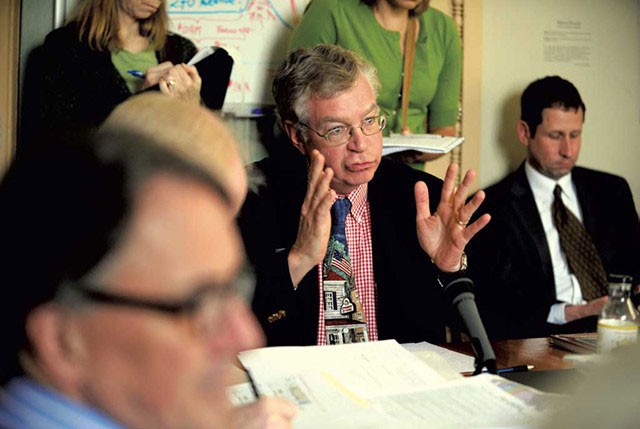 During his 29 years as president of the Vermont Retail and Grocers Association, Harrison earned a reputation as a skillful lobbyist. Nicknamed "The Hammer," he spent recent years vigorously opposing such legislative initiatives as paid sick leave, sugar-sweetened beverage taxes and mandatory labeling of genetically modified food.

Harrison retired last year at age 63, but his departure from the Statehouse has proved short-lived.

The Chittenden Republican confirmed Monday night that Scott had called him earlier that evening to offer him the seat representing the Rutland-Windsor-1 district. A spokeswoman for Scott did not immediately respond to a request for comment. News of Harrison's appointment was first reported by the Vermont Press Bureau.

Dave Soucy, who is general manager at Killington's Green Mountain National Golf Course, had also been vying to replace Tate — a second-term Republican from Mendon who was one of the state's most conservative lawmakers.

Harrison, who says he's more moderate than his predecessor, echoed the governor when discussing his legislative goals. "We want to create economic opportunities," he said. "I am very concerned about some of the things that the governor has articulated about the declining population and declining workforce."

The incoming rep suggested his past work as a Statehouse lobbyist wouldn't influence his lawmaking. "I have no ties with the organization," he said, referring to the VRGA. "I'm in a totally different role now."

But Harrison's experience in the building may come in handy. "I'm certainly very familiar with the Statehouse and many of the legislators," he said. "I can hit the ground running."