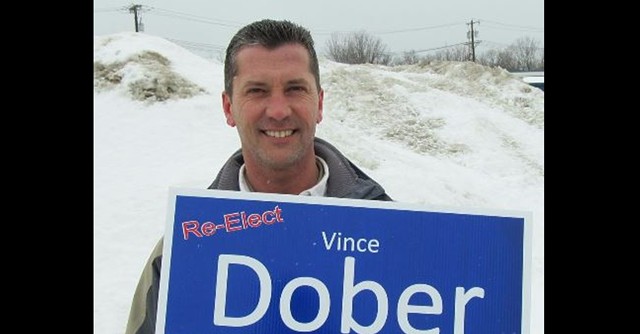 Republican Vince Dober is hoping to return to the Burlington City Council. Dober declared his candidacy for a seat on Friday, just after Democrat Tom Ayres said that he will step down from the council in June. That will force a special election for the Ward 7 seat in the New North End.

Dober, 53, served as a councilor from 2009 to 2013. Dober, who was formerly with the Vermont Air National Guard, decided not to run for reelection so he could spend more time building up his business, Backstage Pub and Restaurant in Essex Junction. "This was sort of just a little break," Dober said. "I bought a business and that business has stabilized."

Dober is the first to throw his hat into the ring after Ayres said he will relocate to Randolph for his new position as executive director of Chandler Center for the Arts. Burlington Republican Party chair Alex Farrell said he started reaching out to area Republicans when he heard rumors that a seat would open up, and Dober stepped forward as "the one that was most eager and able."

Farrell said the party is looking to start "running more good Republican candidates that are articulate and can convey our message." Dober, he said, fit the bill. If elected, Dober would be the second Republican on the council, joining Kurt Wright (R-Ward 4), who represents the New North End.

When he spoke with Seven Days on Tuesday, Dober couldn't say what his priorities would be on the council, though he said he was reacquainting himself with the issues facing the city.

Wright and Dave Hartnett (D-North District) both expressed their support for Dober's candidacy in the news release sent out Friday night.

"I am very pleased Vince is willing to step up and fill this seat on short notice ... While on the council, Vince worked across party lines; I am happy to support his candidacy," Hartnett said in the release.