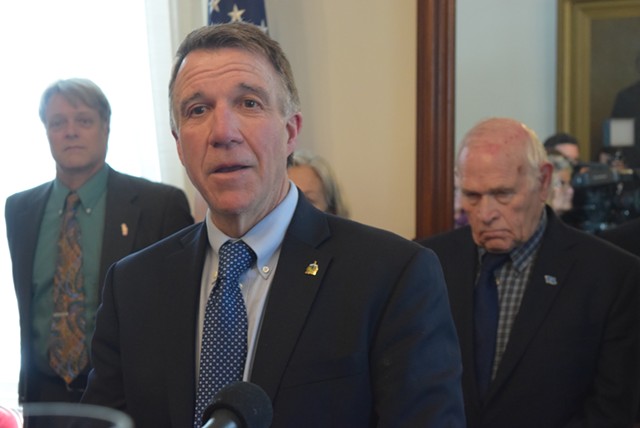 In his first public bill signing ceremony, Gov. Phil Scott put his signature on legislation designed to limit the state's involvement in any federal immigration crackdown.

The freshly inked law is a rejoinder to several of President Donald Trump's executive orders, which enhance immigration enforcement. Scott said Tuesday that the orders "introduced a significant level of uncertainty for states, law enforcement, citizens and non-citizens alike" without making the public safer.

When it was his turn to speak, Senate Judiciary Committee chair Dick Sears (D-Bennington) stepped up to the podium and deadpanned, "I want to thank the president of the United States for bringing together a diverse group of people to agree — and quickly agree, in record time — on a bill of major importance."

The new law gives the governor the sole ability to authorize new agreements between federal immigration officials and local law enforcement. It responds to an executive order calling on local police to help enforce federal immigration law. Scott, who's said he won't enter into such agreements, described the order as "federal overreach."

Vermont's legislation also prohibits the collection of personal information to create a registry of Muslims or any other targeted group.

"This is about Vermont being Vermont and remaining a beacon of hope for everyone in this state," said Donovan.

The Trump administration continues to threaten to pull federal funding in retaliation against so-called sanctuary cities. While Vermont officials insist that the law was carefully drafted to comply with federal law — and they deliberately steered clear of the sanctuary state designation — it's uncertain whether Vermont will face repercussions for its noncooperation. Attorney General Jeff Sessions recently described a Maryland bill, similar to Vermont's law, as creating a "sanctuary state."

The Senate passed the bill unanimously in late February. Three weeks later, the House approved it in a 110-24 vote.