As a marijuana legalization bill was about to go to a vote on the floor of the Vermont House Tuesday afternoon, Democratic leaders pulled the plug and agreed to send it to a committee for further debate.

The move means House leaders were unable to muster the votes to pass the legislation. Whether that kills the bill for the year or not is a matter of speculation.

“It’s not dead,” said Eli Harrington, an East Burke resident who had been lobbying for legalization.

“We believe the bill needs some more time and some more vetting,” said House Majority Leader Jill Krowinski (D-Burlington). “I’m not going to push it out there if it needs more time.”

The legislation, H.170, would legalize possession of up to an ounce of marijuana and the personal cultivation of two mature and four immature plants. It’s based on the legalization system in place in Washington, D.C. It would not permit the sale of marijuana. 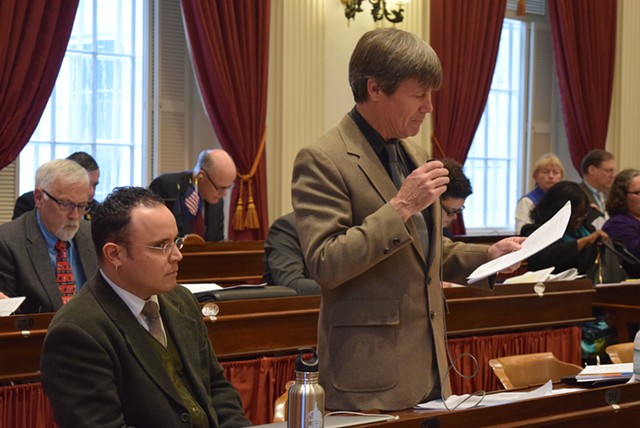 The bill is now destined for the House Human Services Committee. That panel’s chair, Rep. Ann Pugh (D-South Burlington), refused to say whether she had planned to support the legislation on the floor Tuesday. The answer would shed light on the bill’s chances of emerging from her committee.

“I think it’s very appropriate we are looking at the bill,” Pugh said. “I don’t think it helps the conversation for me to come out strongly one way or the other.”

All day Tuesday, supporters and opponents of the bill were lobbying House members for votes. “They’re hard to nail down,” Harrington said.

Both sides expected a close contest, but by midafternoon supporters appeared to have lost confidence that they could prevail. They calculated that it would be better to keep the bill alive in committee than to have it defeated on the House floor.

Some supporters were not entirely happy with that strategy. Harrington said he wanted to see members put on record. “Vermonters deserve to know who’s voting yes or no,” he said.

House Speaker Mitzi Johnson (D-South Hero) had conceded earlier that she was “lukewarm” about the bill, an indication that House leaders were less likely to push members for support.

Senate Judiciary Committee chair Dick Sears (D-Bennington), who supports full legalization — with taxed and regulated pot stores — said he would continue to push the issue. But he said he doubted anything would make it through the legislature this year.

“I think it’s very unlikely this year there’s going to be any legalization,” Sears said. “I think they sent it [to committee] to lie for the rest of the session.”