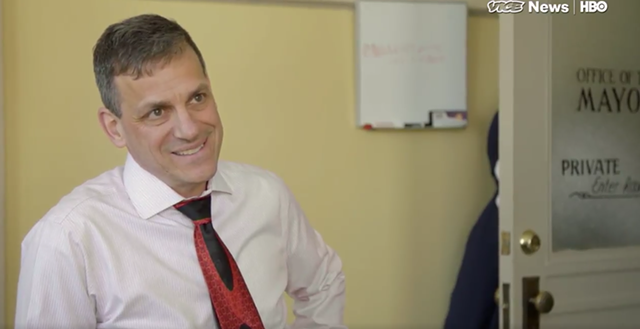 The show’s over for Chris Louras.

“VICE News Tonight” followed the former Rutland mayor Monday as he prepared for his last day in office. He lost his reelection bid March 7 to David Allaire by a big margin: some 776 votes.

The HBO show captured Louras packing up his things inside city hall, exchanging a hug with a colleague and driving off into the sunset in his Smart car (which bears an “I Love Rutland, VT!” bumper sticker).

Much of what he told Vice News during the four-minute clip echoed what he told Seven Days reporter Mark Davis. His loss was a referendum on his decision to relocate refugees to Rutland, he said, and he never saw it coming.

“I really, really believed that the support in the community dwarfed the opposition,” he told reporter Josh Hersh. “That it was a vocal minority.”

Regardless, Louras reiterated, he doesn’t regret a thing.

“Those post-industrial communities that have embraced New Americans, refugees and immigrants are the ones that are thriving and whose future is bright,” Louras said. “Whereas communities like Rutland, in 2017 — our stock is falling.”

Louras hasn’t disclosed any of his plans for the future. But he told Vice News he doesn’t have any advice for others who similarly want to give refugees a chance at a new life.

“If a five-time incumbent who, for the last two elections got nearly 60 percent of the vote, if I couldn’t figure it out here, I sure as shit can’t figure it out for the state of Vermont or for the United States of America. You’ve got to find somebody else that has those answers, ’cause I ain’t that cat.”