Rutland Mayor Says He Was 'Whooped' by Refugee Backlash | Off Message

Rutland Mayor Says He Was 'Whooped' by Refugee Backlash 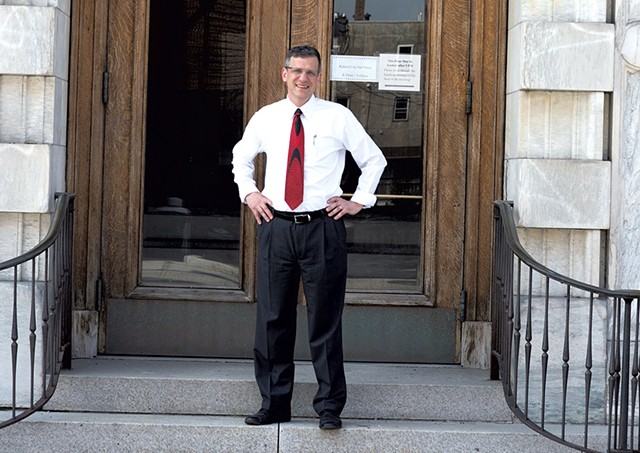 Rutland Mayor Chris Louras didn't utter the word "refugee" during his reelection kickoff speech, and tried desperately to make the campaign about more than just the resettlement debate that roiled his city for the past year.

But Wednesday, as he processed his lopsided defeat to Alderman Dave Allaire, the chief opponent of his plan to bring 100 Syrian and Iraqi refugees to the city, Louras said he had been wrong on two key points:

One, the refugee issue was the only one that mattered to voters. And two, he was apparently mistaken in his oft-stated belief that the refugees' supporters outnumbered their opponents in the community.

"In spite of the fact that we tried to make this campaign about issues and about facts, the reality is that it was in fact a referendum on resettlement," Louras told Seven Days. "They voted on emotion. Rutland is a microcosm of the national dialogue around immigrants and refugees [and] I believe that was the major contributing factor to this campaign and to the voters' decision."

The large margin of his loss to Allaire, 2,196 votes to 1,420, made it clear that there was nothing he could have done to overcome resistance to his signature issue, Louras said.

"It was such a blowout that it is laughable. I had my tail handed to me, so I can't reflect on it and say, 'What could I have done differently?'" Louras, a former Republican who turned independent, said. "When you get whooped this bad, there's no tactic or strategy that overcomes that."

After 10 years in office, Louras, a former Army helicopter pilot, will depart Rutland City Hall on March 15, having lost his job fighting for a plan that never came to fruition.

Late in 2015, Louras unveiled the proposal to bring the refugees to Rutland, which has been losing population for decades. The mayor pitched the plan, without consulting the Board of Aldermen, as a humanitarian imperative and economic development initiative.

Opponents criticized Louras, 56, and Vermont Refugee Resettlement Program officials for their secretive planning. Some critics engaged in nativist rhetoric, and questioned whether refugees would carry diseases or try to bring Sharia law.

In September, Louras appeared to have scored a historic victory when the U.S. State Department approved Rutland as a resettlement site. But President Donald Trump's executive orders cracking down on immigration from Syria and other countries scuttled the plan.

Only two Syrian families, which together include five children, made it to Rutland. Those families, Louras said, made it all worthwhile.

"I have absolutely no regret whatsoever about pursuing the resettlement issue," Louras said. "If bringing five kids here who can rebuild their life cost me my job then so be it. Fine. I'm honestly good with that."

Allaire did not respond to a message seeking comment. He had been among the most vocal opponents of refugee resettlement, though he insisted he was not opposed to refugees, but to the process by which Louras developed the plan.

Allaire told Vermont Public Radio on Tuesday night that he won because of voters' resistance to refugees, as well as concerns about a Louras plan to restructure the fire department.

"It feels wonderful," Allaire told VPR. "I'm so grateful, I'm humbled, I'm thankful to the voters of the City of Rutland. I think this is an exciting night for the city and it's a chance to start new and I can't wait to get to work."

Louras, a Rutland native who served in the state legislature before taking over city hall, said that his political career is over.

"I will not seek any elected office again," Louras said. "That is off the table."

He will remain in Rutland, but he has yet to develop a plan for what he will do next, beyond planting his vegetable garden.

"I had been planning on serving another two years, so I haven't had a chance to reflect on what my prospects are," he said.