Richmond Passes Resolution Welcoming All People to Town | Off Message

Richmond voters passed a resolution Tuesday at Town Meeting declaring it a community that welcomes all people, regardless of their nationality or religion.

It also welcomes people regardless of their color, ethnicity, sexual orientation, socioeconomic status and gender identity.

Longtime resident Jeff Forward introduced the non-binding resolution and explained to the crowd of about 180 people that he began by researching a sanctuary city resolution proposed in Burlington. Numerous other towns around Vermont planned to discuss similar proposals at Town Meeting in the wake of President Donald Trump's efforts to restrict entry of immigrants and refugees from six majority Muslim countries, including war-torn Syria.

Forward decided not to include any reference to sanctuary status after he concluded that Richmond has already adopted a fair and impartial policing policy. But, Forward said, he wanted the town to respond to national trends that he sees as worrisome.


"I don't believe this nastiness in our country is who we are as a country, and I know for a fact it's not who we are as a community," Forward said. "So for Town Meeting, I wanted to come up with some kind of positive and affirming statement for us to adopt." 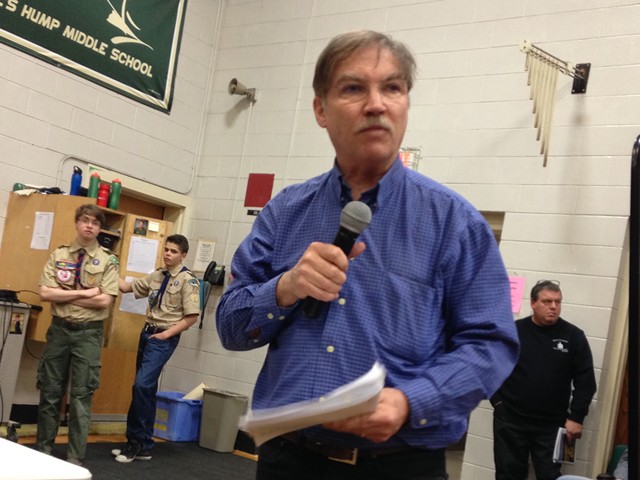 Forward agreed the welcome resolution should be expanded to include socioeconomic status and gender identity after the Rev. Katelyn Macrae, the pastor of Richmond Congregational Church, proposed it from the floor.

On the same topic, Richmond resident Mike Foote won approval to include the welcome statement in the town plan and for the selectboard to appoint a volunteer diversity liaison.
The diversity related resolutions passed easily on voice vote, with little discussion.

Richmond has few refugees and little racial diversity. The Town Meeting assemblage at Camels Hump Middle School was overwhelmingly white. Foote said he personally would welcome refugees from Syria or other countries, although he said Richmond's lack of public transit and affordable housing could be barriers. Still, Foote said, he'd like to see Richmond step up.

"We're all heartbroken with what's going on with the political discourse," he said.

Voters also approved a $3.5 million town budget, which was amended slightly upwards to give town clerk Linda Parent a $6,000 raise.

Richmond resident and Justice of the Peace Jane Van Landingham introduced the proposal to give Parent a pay increase, and initially proposed a sum of $3,000. The crowd enthusiastically embraced the idea and pushed to double the amount.

Parent is the "face of Richmond" who does all the regular duties of a town clerk, plus all the jobs that just need doing, Van Landingham said. That sometimes involves grabbing a shovel and removing a dead porcupine from the road.

"She never tells you, 'I don't know' or 'This isn't in my job description,'" Van Landingham said.

Parent's pay will increase from $47,334 to $53,334 annually. She thanked voters for their confidence, and then reminded them to register their dogs.

Also at Tuesday's meeting, voters approved a resolution that responded to Trump's decision not to release his full tax returns.

Richmond selectboard member Steve May introduced the measure, which urges the state legislature and secretary of state to compel all future presidential candidates to provide tax returns as a condition of getting on the primary ballot, beginning in the 2020 election cycle.

Other towns planned to consider a similar measure.

Voting on the school budget, town forest appropriation and elected offices is by secret ballot. Results won't be available until after the polls close at 7 p.m.