Rutland Mayor Chris Louras, who endured months of withering criticism for his plan to bring Syrian refugees to the city, lost his reelection bid on Tuesday.

In unofficial voting results, David Allaire, a city alderman and leading critic of the resettlement, trounced Louras, a 10-year mayoral incumbent, by a 776-vote margin, according to results cited by the Rutland Herald and WCAX-TV.

"I'm simply wishing him luck and I'm moving on," Louras told Seven Days Tuesday night. He declined further comment, saying he would "not hazard a guess" as to what the election results say about Rutland's support for refugees.

Allaire did not immediately respond to a message seeking comment.


While Louras campaigned on a series of issues, and touted a reduction in many categories of crime, along with an improved downtown business district, the refugee debate has dominated political life in Rutland for the past year.

A Rutland native, Louras reached out to refugee resettlement officials in late 2015 and hatched a proposal to bring 100 refugees from Syria and Iraq to the city, which has been losing population for decades. The mayor pitched the plan, without consulting the Board of Aldermen, as a humanitarian imperative and economic development initiative.

He faced a fierce backlash from many residents and aldermen, some of whom engaged in nativist rhetoric. Reporters from across the state and country descended on the city. 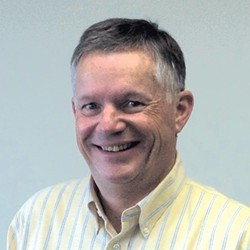 After months of conflict, Louras in September appeared to have scored a legacy-defining victory when the U.S. State Department announced that Rutland had been approved as a resettlement site and would begin accepting refugees. But President Donald Trump's executive orders cracking down on immigration from Syria and other Muslim countries scuttled the plan. Only two Syrian families made it to Rutland.

Allaire always insisted he is not anti-refugee, but he led the charge to investigate whether Louras broke any laws in his handling of the proposal.

"We've had a difficult time getting any information from the mayor's office or the refugee resettlement folks. It seems to be all cloak and dagger, behind the scenes," Allaire, a sales manager for Interstate Batteries, told Seven Days last month.

To varying degrees, all three of Louras' challengers opposed his refugee plans.

Related Rutland Mayor Says He Was 'Whooped' by Refugee Backlash