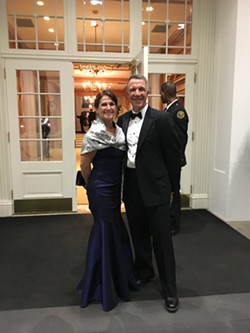 When Gov. Phil Scott went to the White House for dinner Sunday night, there was no snub from the Donald. There was no overt sneer over the fact that Vermont’s Republican governor had once called the man who went on to become president “offensive.”

“He was cordial to everyone,” Scott said of President Donald Trump, who hosted the nation’s governors at a state dinner.

Like the other governors and their spouses, Scott and his wife, Diana, were introduced to the president and first lady Melania Trump. She was making a rare White House appearance for the event.

“You had your picture taken and then you were shuffled off to another room,” Scott said Monday in a phone interview as he prepared to return to Vermont from a four-day National Governors Association meeting that included two White House events. “I never met him one-on-one.”

But Scott did hear Trump talk twice — once at the Sunday night dinner and again at a Monday morning White House meeting.

Scott described hearing a sampling of Trump’s characteristic tone but also an attempt by the president to ramp down some of his well-known rhetoric, at least on immigration.

Over the course of four days of meetings with Trump, Vice President Mike Pence and administration officials, Scott said, the message was that the president is focused on deporting immigrants who commit crimes rather than those who are violating only immigration law.

“He didn’t feel as though his executive orders were clear,” Scott said. “It appears he’s trying to walk back on that a little bit.”

In Vermont, Trump’s executive order on immigration prompted Scott and legislative leaders to launch efforts to insulate the state from aiding the president. Trump’s orders also incited fear among undocumented workers on Vermont farms that he’s out to deport them. Neither Trump nor anyone on his staff mentioned such an effort, Scott said.

Scott said the president is expected to come out with a new executive order on immigration. What that might say, Trump and his staff did not reveal, the governor said.

The president didn’t seem to give governors a clear idea what he plans to do with the Affordable Care Act or other government programs he’s threatened to cut.

“He did say, ‘We’re going to repeal and replace Obamacare,’” Scott said. “What he said was he’s got something big coming out. It’s going to be good — really good. I think that’s what he said.”

Nonetheless, Scott came away from the meetings with the impression that Trump’s administration will listen to the nation’s governors. It should help that Pence is a former Indiana governor, he said.

This was the governor’s first trip to the White House. He wore a tux and said he was “in awe” of the historic significance of his surroundings.

But the race car-driver-turned-governor had to skip watching Sunday’s Daytona 500 for the day’s NGA events. “I missed the great American race,” he said.

Instead, he heard from a president who promises “to make America great again.”

According to the Associated Press, Trump told the governors, “We’ve accomplished almost everything we’ve started out to accomplish.”

Scott said that comment stood out to him. “He’s a very confident individual.”