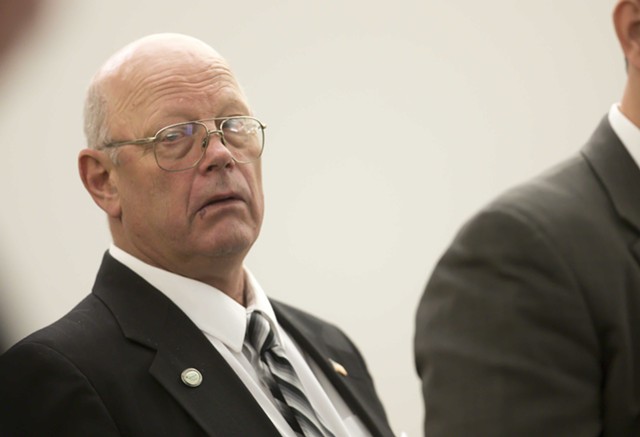 Former state senator Norm McAllister showed no emotion in court Friday as prosecutors played a graphic tape of a telephone conversation between him and his alleged victim in a sex-for-rent case.

"I know I was basically forcing you to do something you didn't want to do," McAllister allegedly tells the woman at one point in the recorded conversation.

McAllister said his then-lawyers pressured him into accepting the deal, under which he pleaded no contest to two counts of prohibited acts and a felony lewd and lascivious charge, which prosecutors agreed to reduce from sexual assault. The lewd and lascivious charge carries a sentence of up to seven years in prison, while a sex assault conviction carries a maximum sentence of life in prison.

McAllister's former lawyers, Brooks McArthur and David Williams, testified Friday that they believed the plea deal was the best offer that they could hope for in light of the tape, which was set to be introduced as evidence.

Maley did not decide the matter Friday after more than three hours of testimony, but indicated he would issue a written opinion. It won't come for at least two weeks. The judge gave McAllister's new lawyer, Bob Katims, time to write a memorandum outlining the reasons for the motion to vacate; and also granted time for deputy state's attorney John Lavoie to respond.

Katims objected to the tape being played in court, saying it was not relevant. The judge allowed it to be played after Lavoie argued it was central to the question of whether or not McArthur and Williams provided good legal counsel.

Both lawyers testified at the hearing Friday that the tape played into their decision to urge McAllister to accept the deal because it gave the state a strong case. "That recorded conversation is devastating," McArthur said on the stand.

Friday's hearing was a continuation of a proceeding that began February 3.

Katims argued on the first day of the hearing, and again Friday, that McAllister didn't fully understand the nuances of a no contest plea. It was attractive to the defense partly because it could help insulate the former senator from liability in a civil suit filed by the alleged victim, Katims said, while a guilty plea or conviction would conceivably remove the alleged victim's burden of proof.

But even with the no contest plea, McAllister likely would face pressure to admit the sexual offense during a psychosexual evaluation required before sentencing. Denying the conduct during that evaluation would not be a good thing for sentencing, suggested Katims, who implied that McAllister's lawyers did not help him understand the repercussions.

McArthur, who spent more than an hour on the stand Friday, insisted that he and Williams told McAllister about the potential ramifications of the deal.

Katims suggested that the deal was a hurried, last minute arrangement made as court shut down after a long day of jury selection on the eve of trial. Katims emphasized that until the day he accepted the plea deal, McAllister had rejected prior plea offers and told his lawyers that he wanted his day in court.

He made it very clear that "he didn't want anything to do with a plea, that he wanted to try this case," Katims said to McArthur.

McArthur agreed that McAllister had expressed that opinion for more than a year. But on the eve of the trial, McArthur said, the defendant changed his mind, fully understood the plea offer and accepted it freely.

"There was no doubt in my mind that this was in his best interest," McArthur added.