Prosecutors to Drop 16 Cases After Burlington Cop 'Lied' About Stop

Prosecutors will drop 16 pending criminal cases investigated by a Burlington police officer who resigned Monday after allegedly lying during a drug investigation. Authorities on Thursday said they are still considering whether to charge Christopher Lopez with perjury.

Chittenden County State's Attorney Sarah George told reporters that Lopez — who allegedly made up a justification to search a vehicle in October — could no longer be a reliable witness.

Burlington police Chief Brandon del Pozo acknowledged that news of Lopez's dishonesty — which only came to light because the officer failed in his attempt to turn off his body camera — could erode the public's faith in police.

"It does call into question the integrity of the Burlington police and it gives license to our critics and skeptics," del Pozo said 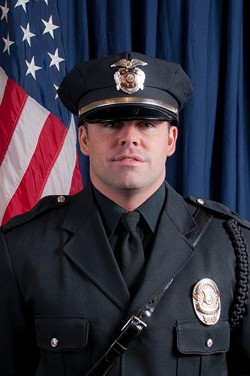 during the press conference.

The chief said he was prepared to fire Lopez, but the officer resigned the day before his scheduled disciplinary hearing. "We acted as fast as we reasonably could, I believe," del Pozo said.

Lopez wrote in a sworn affidavit that he could smell "the odor of fresh marijuana emitting" from a car driven by Burlington resident Michael Mullen, 25. But he was caught telling another officer on the scene that he couldn't smell marijuana and was trying to "get creative" to justify searching Mullen's car.

The other officer, Nicholas Rienzi, is not facing discipline, del Pozo said. Rienzi did not know that Lopez had lied in his written affidavit about smelling marijuana, the chief said, and Rienzi did not investigate the case after the traffic stop.

Mullen's attorney, Leroy Yoder, said his client had been "courageous" in his willingness to challenge law enforcement in the case. Mullen was aware that he could have sat in prison for months as Yoder fought the case.

Had Lopez not failed to turn off his body camera, Yoder said, Mullen's fate would have rested largely on the officer's dishonest account of events.

"It's clear what the officer's word was worth," Yoder told reporters. "It may not have been clear ... going through the court process."

George said prosecutors will dismiss 16 of 26 pending cases that involve Lopez. None of the 16 involve defendants who are currently incarcerated, George said. In the other 10 cases, Lopez either was not a "critical officer involved" or prosecutors believe they can prove the charges without him, George said.

On Friday, George filed formal notice with the court that she was dropping the 16 cases, most of which involved charges of driving with a suspended license and drug possession. There were four felony drug cases dismissed, including Mullen's.

The affidavit written by Lopez and other court documents provide the following account of Mullen's arrest:

Around 10:30 p.m. on October 24, 2016, Lopez witnessed Mullen, behind the wheel of a Ford Thunderbird with a passenger inside, parked in the Cumberland Farms parking lot on Riverside Avenue.

Lopez said in his affidavit that the lot is a hotspot for "drug transactions and usage." After Mullen left the lot, Lopez said he stopped the car on Hillside Terrace because the tag lights were defective. A records check, Lopez said, showed that Mullen's license had been suspended.

Lopez wrote in his affidavit that he could smell marijuana as he approached Mullen's car.

But his body camera, which he apparently tried to deactivate, captured the following exchange, according to court records.

"You're off, right?" Lopez asked fellow officer Rienzi, who arrived on the scene as backup.

"I'm just trying to get creative about how I'm going to get in this car," Lopez said.

"Do you smell anything?" Rienzi asked.

"Two guys tatted the fuck up," said Lopez, who later added: "They're in a wicked shit box, but I don't have any drug history on them."

Lopez, on the recording, also admits, "I might not have shit on this."

Officers eventually called in a police dog, which hit on drugs. A search turned up six grams of cocaine, bullets, plastic sandwich baggies, a non-criminal amount of marijuana and $100 cash.

On Thursday, del Pozo stressed that he removed Lopez from the line of duty soon after learning of the camera footage. The chief said he publicly announced the allegations against the officer in an effort to be transparent.

Police officers nationwide are legally allowed to deceive suspects and be "creative" in questioning them to find ways to conduct searches, del Pozo said. But by being dishonest in a sworn court document, the chief said, Lopez went too far.

Lopez, who came to Burlington from the Baltimore police department in 2014, could not immediately be reached for comment.

Officers are not required to keep their body cameras running while conversing with other officers, del Pozo said.

When asked whether officers should be required to keep cameras rolling throughout traffic stops and other investigations — or even when talking to other officers — del Pozo cited privacy concerns.

"That's a policy debate we could have," the chief said. "I'm glad in this case it helped us find wrongdoing. But there are ... tradeoffs."

It is not the first time Burlington police officers have generated controversy with body cameras, which they have worn since December 2014.

Two Burlington officers turned off the recording devices shortly before shooting and wounding a distraught Colchester man in September 2015. The officers said that they feared the red "on" light would give away their location. But as Vermont Public Radio later reported, the officers could have turned off the light without deactivating the camera.