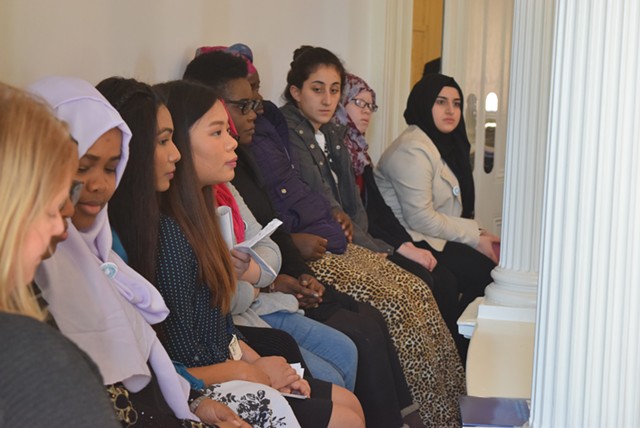 About a dozen students from the Burlington High School International Club watched Thursday afternoon as the Vermont Senate unanimously passed a bill meant to reassure them, and other immigrants, that they are welcome.

“I think we’re doing something really special here today,” said Senate President Pro Tempore Tim Ashe (D/P-Chittenden). “It really does send a different kind of message ... Whether you look different or pray differently or whatever it is, you’re welcome in this place that respects differences.”

The Senate voted 30-0 in favor of the bill, which was written in response to President Donald Trump’s recent immigration orders.

Lawmakers said the legislation seeks to do two things: prevent the federal government from deputizing local police to enforce immigration law, and bar the state from providing residents’ personal information to be used for a religious registry.

The BHS students came in person to watch the vote and thank legislators for acting. Since December, teens have worked on a campaign to spread the message that “all are welcome.” They designed a card that shows two hands holding a dove.

BHS student Noorto Mohamed said after the vote that she feels welcome in Burlington. But as Muslim refugees from Somalia, her family also worries about the rhetoric, and unknowns, surrounding the national debate on immigration.

“Even though we’re citizens ... my mom fears for us sometimes,” she said. “This has definitely helped, seeing all the Americans that are very accepting."

The legislation that passed so overwhelmingly in the Senate on Thursday is on the fast track. It has the support of Republican Gov. Phil Scott, along with Democratic legislative leaders. It faces another vote in the Senate on Friday before heading to the House and then on to the governor.

Sears acknowledged that the bill upset some who worried the legislation would prevent Vermont law enforcement from stopping illegal activity. The bill doesn’t do that, he insisted on the Senate floor.

He offered two examples of what Vermont police could and could not do under the proposal.

If an officer responds to a domestic violence call and the victim says she’s afraid to press charges because her student immigration visa has expired, that officer is not required to report her to federal immigration authorities, he said.

In another instance, if an officer executes a search warrant, finds illegal drug activity and that the offenders lack immigration status, the officer can report them to federal authorities, Sears said.

The bill assures undocumented immigrants that they can report crimes, send their children to school and participate in civil life without fear that their interaction with state government will get them deported, Sears said.